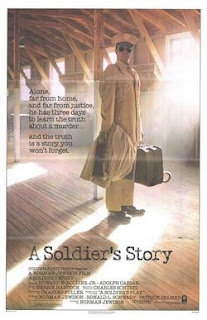 In this gripping film that takes place near the end of World War II (1944), Captain Davenport (Howard Rollins, Jr.), a proud black army attorney, is sent to Fort Neal near Tynin, Louisiana to investigate the shooting death of Sergeant Waters (Adolph Caesar), who was murdered by unknown assailants near the black army base. Davenport’s interviews with the men under Sgt. Waters’ command reveal that he was a vicious man who despised Negroes who didn’t meet his exacting standards of speech, appearance, and duty. Although two bigoted white officers seem to be the lead and likely suspects, Davenport is sure that there is something going on behind the scenes that either he isn’t seeing or is being hidden from him. But what is it and who is hiding it?

When it was released back in late 1984, A Soldier’s Story received a lot of attention not only because of its large and mostly black cast, but also because the leads were also black actors (unlike The Cotton Club). The film featured the star turn by up and coming actors including Robert Townsend (who would go on to direct Hollywood Shuffle

), David Alan Grier, a character actor best known for being on the early 90’s TV sketch comedy, “In Living Colour,” and also a young but not-so-raw Denzel Washington – two years from the role that would earn him his first Oscar nomination.

The film’s best roles belong to Howard Rollins, Jr. and Adolph Caesar (who were never on screen together), both of whom are now deceased. Rollins plays Captain Davenport with such gripping strength that he instantly commands the attention of the audience whenever he is on screen, even when he’s in the background. Rollins clearly understood that for Davenport to be a believable character in his particular situation, he would have to play Davenport as having a magnetic personality, an indomitable will, and a large amount of arrogance – if Davenport were to do his job while suffering the slings and arrows...

Caesar’s Sgt. Waters is a relentless force embodying the conflicting ideas of what a black man should be and how he should live in those particular times, a black America in an America on the verge of the Civil Rights movement. He wants black men to be proud, but he understands that a black man most live in a white world as an intelligent black man, although not as one who threatens white men. It’s this dichotomy of pride and deference that festers in Waters’ mind.

Charles Fuller adapted A Soldier’s Story from his Pulitzer Prize-winning play, A Soldier’s Play. As good as the performances are, it’s this incredible script that is simultaneously a fine mystery, an amazing depiction of history, and precise social commentary. Although director Norman Jewison directs this at times as if it were a TV movie, he understands the complex issues brought forward by Fuller’s writing. Jewison allows the script’s flashbacks to define the elements of the murder mystery: the victim, the suspects, and the context. Through Rollins’ performance as Capt. Davenport, Jewison doesn’t intrude as Fuller’s script brings everything together into the present while dealing with the conflicting notions of what it means to be a black man. It’s spellbinding movie stuff. So what does it mean to be a real black man? Who knows? But A Soldier’s Story, a remarkable film ably performed by a fine cast, gives us something to think about.