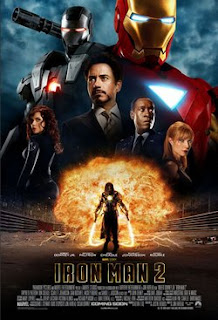 Back in 2008, the most anticipated superhero event movie was Christopher Nolan’s The Dark Knight

, which certainly delivered on its promise and more. Many people were looking past the early May release of Iron Man; some had even been laughing at this film, which starred a superhero character that was probably C-list (at best) in the minds of the general movie-going audience. Iron Man was a surprise smash, grossing over 300 million dollars domestically. Now, the sequel, Iron Man 2, arrives with a bigger bang, and actually improves on the original – giving us more Iron Man-in-action.

As the new film opens, billionaire inventor Tony Stark (Robert Downey, Jr.) reveals to the world that he is the armored super hero, Iron Man, whom people previously believed was Stark’s bodyguard. However, that only puts Stark under more pressure from the federal government, especially the grandstanding Senator Stern (Garry Shandling), to share his technology with the military. Stark is unwilling to divulge the secrets behind the Iron Man armor because he fears the technology will slip into the wrong hands.

When an unexpected adversary attacks Tony Stark using technology similar to the Iron Man armor, the public, the press, and Senator Stern are no longer willing to take no for an answer. In fact, this new villain, a Russian named Ivan Vanko (Mickey Rourke), has a connection to Tony’s late father, Howard Stark (John Slatterly), and Vanko even joins forces with Stark’s industrial rival, Justin Hammer (Sam Rockwell). With his secretary Pepper Potts (Gwyneth Paltrow) and his friend James “Rhodey” Rhodes (Don Cheadle) by his side, Tony forges new alliances – the mysterious Nick Fury (Samuel L. Jackson) and a shadowy new assistant, Natalie Rushman (Scarlett Johansson) – and confronts the two men determined to destroy him.

Watching Iron Man 2, one gets the feeling that the cast is having a good time, especially Robert Downey, Jr. as Tony Stark/Iron Man. Downey spent a decade sabotaging his career via drug addiction, which was sad, but made even worse by the fact that Downey was such a damn fine actor. Surviving the scourge of Lady Cocaine, Downey has resurrected his career, in large part by revealing his deft skills as a comic actor who can throw down droll wit and sledgehammer snark with equal power. Iron Man 2 simply reminds me that I could watch Downey all day as Iron Man or Tony Stark

Gwyneth Paltrow is equally good as Pepper Potts, but her good work only serves as a reminder that this is a sadly underutilized character. Don Cheadle is a better Rhodey than Terrence Howard. Cheadle is so serious and strong in his performance that he makes it believable that Rhodey is one of the few people Downey Jr.’s Tony Stark respects, takes seriously, and genuinely likes. I was also quite surprised at how good Mickey Rourke is as Ivan Vanko; in fact, Rourke’s Vanko is good enough to become Stark’s signature film rival.

Sam Rockwell is not good as Justin Hammer, an annoying character that seems out of place here and is actually a detriment to the film. Scarlett Johansson is actually good in this film, but her character, though fun, is a little extraneous. Pepper Potts could have done much of what Natalie Rushman did in the story. That said I wouldn’t mind seeing the Natalie Rushman in her own movie.

Iron Man 2, however, is so highly-polished and entertaining that I’m inclined to ignore the faults: the occasionally clunky pacing, too many superfluous or unconnected characters, and that isolated awkward Nick Fury/Shield sub-plot. The superhero fight and action scenes make Iron Man 2 seem like a superhero comic book come to life as a high-octane thrill ride. Robots, Iron Man armor, battle suits, rockets, and assorted big guns pound away at the senses. The big (and extended) final battle between Iron Man and Ivan Vanko is dazzling. Though not perfect, moments like that made me wish Iron Man 2 wouldn’t end.