Michael Caine Made a Star Turn in "Alfie" 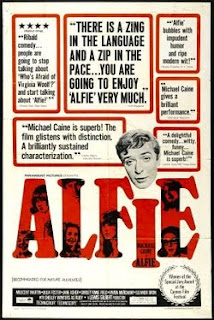 Michael Caine earned an Academy Award nomination for his performance in the Oscar® “Best Picture” nominee, Alfie. It’s the tale of Alfie (Michael Caine), a cad and “lady killer” who specializes in loving women and leaving them. However, Alfie’s fortunes take a turn when he impregnates Gilda (Julia Foster). At first, Alfie shows interest in the baby boy, but when Gilda pushes for marriage, Alfie pushes off. Gilda accepts a proposal of marriage from Humphrey (Graham Stark), an old suitor who has been pining after her for ages. Alfie callously brushes aside the entire situation and marches on to new lovers until he gets his comeuppance.

Alfie is one of those pictures where the directing, screenwriting, and lead actor come together so seamlessly that the film comes off as a harmonious enterprise. The script is tightly written, but allows the actors room to breath. The director expertly follows the lead of the writing and the star, and crafts a perfect rhythm to which the performances can move. Of course, the star Michael Caine. He deftly moves back and forth, breaking the fourth wall to explain the film narrative and his situation directly to the movie audience. He smoothly breaks it every time he wants to explain his philosophy of life, his method of operation in matters of lust, and the evolution of the his story. Alfie is a charming rogue, a callous jerk, and a selfish and self-centered boy, but Caine makes him such an engaging and likeable character. He makes him so human and so sympathetic that one can’t see Alfie as evil man, just a man certain that he is the captain of his ship and that he can live with both his conquests and his errors. Alfie

is certainly one of those times we find ourselves rooting for the cad/lover boy.