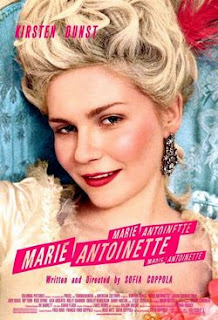 In her film, Marie Antoinette, Sofia Coppola directs a stylized portrait of a naïve princess, who became Queen of France when she was 19 years old.

Austria, 1768: Austrian princess Marie Antoinette (Kirsten Dunst) becomes betrothed to the dauphin (heir) of the French crown, Louis XVI (Jason Schwartzman). At the age of 14, Marie is stripped of all her possessions and thrown into the opulent French court at Versailles (near Paris) where vicious gossip defines everyone. Marie is alone and mostly without guidance, and Louis remains distant even after marriage – even refusing to consummate their union. By 19, Marie is Queen.

Adrift in Versailles’ dangerous world of conspiracy and scandal, Marie dives into the decadent life of French aristocracy, living the lavish life of a young royal. She buys extravagant clothing and jewelry for herself and has hugely expensive tastes when it comes to decorating the estate. She even has an affair with an alluring Swede, Count Fersen (Jamie Dornan). Many, however, view Marie as out of touch with her subjects, and the youthful indiscretions and frivolity that are her only releases from the confining life as Queen also become her undoing.

Coppola, who won a screenplay Oscar for her film, Lost in Translation

, focuses Marie Antoinette on the life of the super wealthy and aimless. Coppola’s stated goal was to capture life in 18th century Versailles from the point of view of a lonely foreigner, so the narrative follows Marie through a whirlwind of extravagant costumes, opulent surroundings, and luxurious foodstuffs. In fact, one might consider this movie to be a lavish soufflé of kaleidoscopic operas, revelries, and even a costume ball that looks like a 21st century bash. Watching the film, you might get hungry for this pastel-colored world where cookies, candies, and cakes, and other sweets are so abundant, even a chamber pot might hold a multi-tiered cake.

Don’t think of Marie Antoinette even as historical fiction. It has little or no historical or political weight; this is all about the look. Visual anachronisms (as well as the modern rock, new wave, alternative soundtrack) mark this as more Coppola’s personal cinematic vision (a colorful art project) than it does cinema as history or even docu-drama. To that end, Marie Antoinette sure is a beautiful film. The costumes (Oscar-nominated), art direction/set decoration, cinematography, and makeup are some of the most stunningly beautiful that I’ve ever seen on film. So while the acting (Kirsten Dunst is wooden, except for a moment here and there) and the story are dry, stiff, and sometimes missing in action, the setting is splendid eye candy. Two hours of pretty style and no substance, however, is just too much to bear.

Posted by Leroy Douresseaux at 7:01 PM