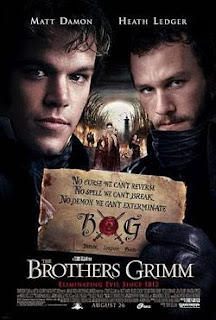 FANTASY/ADVENTURE with elements of action, comedy, horror, and mystery

The Brothers Grimm, Wilhelm (Matt Damon) and Jacob (Heath Ledger), are renowned collectors of folklore and are also frauds. They travel from village to village in French-occupied Germany (around 1811 or 1812), and, with the help of two assistants, rid the hamlets of monsters and other “enchanted” creatures – monsters that are of their own making. The Napoleon government calls their bluff, however, when Delatombe (Jonathan Pryce), a French military official, demands that Will and Jacob investigate the disappearances of 11 girls in and around a remote village and a nearby forest.

Initially the brothers assume that a group of men are pulling the same stunts they do, but they discover that the events in the forest really do involve the supernatural. The disappearances are directly connected to a 500 year-old curse. In an ancient tower deep in the dark forest sleeps the immortal sorceress, the Mirror Queen (Monica Bellucci), and though she sleeps, she commands the denizens of the fearsome magic forest, both animal and plant, to gather what is necessary to break her sleep and return her to her youthful beauty. With both French officials and the villagers doubting them, Will and Jake, joined by a village trapper named Angelika (Lean Headey), race solve the mystery of the curse if they are to save their own necks from the French and to free the village of the great evil.

, as well as being a Monty Python alum) with the imagination of horror movie scribe, Ehren Kruger (Scream 3 and The Ring

), and in theory we should get something great. However, the first hour of Gilliam and Kruger’s collaboration, a new film entitled The Brothers Grimm, is an absolute disaster – a walk-out-the-theatre, sleep inducing disaster. Somewhere deep into the film’s second act, it comes alive. The film takes the real life folklore collectors, of course the Brothers Grimm, and turns them into fraudulent monster hunters, but also creates a scenario in which they redeem themselves and launch their literary career.

Kruger’s imaginative and radiant spin on the Grimm fairytales really doesn’t come to life until late; before that, all his script manages to do is drag out a concept that is itself nothing more than a fairytale – short and sweet, but not a two-hour movie. How Will and Jake got to the point of their conflict with the Mirror Queen is of little or no interest. In a written folktale, that would amount to maybe two paragraphs and not more than two-minute voiceover narration in a film. The story is really about the Brothers Grimm versus the Mirror Queen; all the other stuff (brotherly feuds, worrisome French officials, and the brothers’ snake oil show) becomes refuse if you stretch it out too long, which Kruger’s script did. When the Grimms finally take on the Queen, the film becomes a messy, but entertaining little fairy tale flick.

Gilliam, whose film career has sputtered much of the last decade, maintains his visual aplomb. The Brothers Grimm has production values to rival great films, whether they are serious costume drama or classic fantasy films like The Wizard of Oz

or Tim Burton’s Nightmare Before Christmas

. The costumes, sets, props, visual effects, cinematography, etc. are fabulous – from the dreary village hovels and mud-soaked streets to the haunted forest and the interiors of the Mirror Queen’s sumptuous (though dusty and filled with spider webs) sleeping chamber – and affirm Gilliam’s eye for creating period detail in fantasy movies.

Sadly, he doesn’t seem to have much control over the film’s narrative. At times, The Brothers Grimm

is a clunky action movie, and then it becomes a comic fantasy full of bumbling oafs with weird accents, striking images (the horse that swallows a child whole), whimsy, and a variety of strange creatures. Gilliam seems powerless before Kruger’s awful dialogue for this movie (much of it hard to hear because of poor sound work). In the end, all he can do is make it an action/adventure fairy tale, in which all the characterization is lost in the sound, the fury, and the art direction/set decoration. Still, he’s the one who salvages any entertainment out of this messy script. The Brothers Grimm is like a Gilliam sampler of the director’s film trademarks – medieval shenanigans and gilded surrealism.

None of the actors here is worth mentioning, only to say that Heath Ledger still has that winsome handsomeness that makes him such a captivating boy. Gilliam and Kruger do great disservice to the female leads in this film, Lena Headey and Monica Bellucci. Ms. Bellucci is quite beautiful, but great actress she’s not. Her Mirror Queen won’t have people thinking of the White Queen in Disney’s Snow White

. If you must see Gilliam’s dazzling vision on a big screen, then, by all means go. Otherwise, The Brothers Grimm is a home video experience – a fractured fairy tale that kids won’t dig, but movie lovers might appreciate for the clever visual invention.