Review: "Borat" is a National Treasure from Another Nation 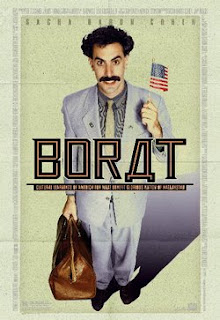 In the film: Borat: Cultural Learnings of America for Make Benefit Glorious Nation of Kazakhstan, writer/actor/comedian Sacha Baron Cohen takes one his most popular characters from his HBO comedy series, “Da Ali G Show,” the Kazakhstani reporter Borat, and sends him on a road trip across America. Cohen-as-Borat then engages real Americans in this faux documentary prompting them with seemingly innocent questions and his outrageous (and sometimes boorish) behavior into revealing their worst prejudices and attitudes. Along the way, Borat even runs naked through a hotel.

Borat Sagdiyev (played by Cohen in a role that won him a 2007 Golden Globe) is Kazakhstan’s sixth most famous man and a leading journalist for the State run TV network. Borat wants to travel to the U.S., what he calls “greatest country in the world,” and learn things that might benefit Kazakhstan. Camera and film crew in tow and joined by his cameraman/sidekick, Azamat Bagatov (Ken Davitian), Borat lands in New York City and heads south encountering the fruit of American citizenry. However, another quest subsumes Borat’s original purpose for coming to America. He is determined to travel to California where he will find and marry Pamela Anderson.

Borat: Cultural Learnings of America for Make Benefit Glorious Nation of Kazakhstan lives partially in that esteemed sub-genre of film comedies, the mock documentary or “mockumentary,” the most famous example being This is…Spinal Tap. This is, however, firmly a fake documentary in which the documentary filmmakers mean to fool the subjects of the documentary. As Borat, Cohen is relentless and doesn’t give a sucker an even break when dealing with his clueless American subjects. These people apparently have no shame in displaying their petty bigotries and silly prejudices on camera. Were these people not ashamed to show their ugly sides because they assumed Borat was a just a dumb foreigner and his film would only be seen in another country?

Cohen shrewdly picks his targets, discerning the ones who would make great theatre – an example being the rich, Southern white suburbanites who lived in a neighborhood where one street was named “Succession Lane.” The fraternity boys who appear towards the end of the film are a hoot, and they’re carbon copies of the ones I knew when I attended a major, formerly segregated, Southern state flagship university.

Borat is certainly a lout, and his loutish behavior occasionally grates on the nerves, but the vast majority of the time, his encounters with people lead to double-side-splitting comedy. With Borat: Cultural Learnings of America for Make Benefit Glorious Nation of Kazakhstan, Sacha Baron Cohen proves once again that he is a genius when it comes to revealing the just plain awful, ugly, vain, and intolerant side of people – a side they’re all too willing to display for the camera. Lovers of movie comedy shouldn’t miss this comic social commentary that is worth watching at least twice.