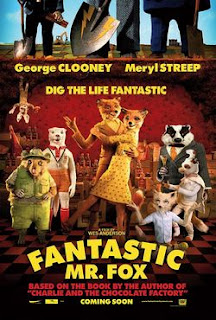 ). The film is based on a children’s book of the same title by author Roald Dahl first published in 1970. It is the story of a human-like fox who outwits his human neighbors and steals their livestock and food right from under their noses.

Mr. Fox (George Clooney) is a thief. To feed his family, he steals livestock from three wealthy local farmers, and during one such mission, he is joined by his wife, Mrs. Felicity Fox (Meryl Streep). However, the couple is ensnared in a cage, but escape after Felicity reveals that she is pregnant. Years later, the couple is living an idyllic home life with their sullen son, Ash (Jason Schwartzman), and Mr. Fox’s visiting young nephew, the soft-spoken and talented Kristopherson Silverfox (Eric Chase Anderson).

After 12 years of domesticity, Mr. Fox feels his wild animal instincts coming to the fore, and this bucolic existence starts to bore him. With the help of his pal, an unassuming opossum named Kylie (Wallace Wolodarsky), Mr. Fox soon slips back into his old ways as a sneaky and highly successful thief stealing chickens, turkeys, and apple cider from the wealthy farmers, Franklin Bean (Michael Gambon), Walter Boggis (Robin Hurlstone), and Nathan Bunce (Hugo Guinness). Doing this endangers not only his beloved family, but also the whole animal community, when Bean leads a vicious, total war campaign to capture Mr. Fox. Trapped underground and without enough food to go around, will the animals band together or will they turn Mr. Fox over to the farmers?

Fantastic Mr. Fox is what happens when quirky drowns whimsical. Instead of a fanciful animal fable, what Wes Anderson gives us with this stop-motion animated film is weird and peculiar. It is sometimes entertaining, even delightful, but still weird and peculiar. The script by Anderson and Noah Baumbach tries to impart wisdom, but much of it is lost in the idiosyncratic visual vibe of this film.

There are some good voice performances, especially Wallace Wolodarsky as Kylie. Because their performances, Jason Schwartzman as Ash and Eric Chase Anderson as Kristopherson end up being the best pairing in the film – the most interesting team.

Fantastic Mr. Fox is a sometimes fun ride, although much of it seems awkward. The strange textures of the animation are a mixed bag. Fantastic Mr. Fox looks like a Tim Burton stop-motion animation picture done with tattered puppets and shabby sets. Ultimately, I find myself sitting on the fence about this film because it entertains and perplexes in equal measure.

Posted by Leroy Douresseaux at 10:50 AM