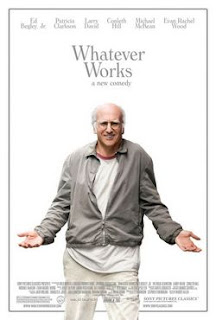 Back in the mid-1970s, Woody Allen apparently wrote the screenplay for the film, Whatever Works, intending to have the late actor, Zero Mostel play the lead. When Mostel died, Allen put the script aside. He revived it in order to make a movie before a potential 2009 Screen Actors Guild strike, which didn’t happen. Although this movie was supposed to be made in the 70s, Whatever Works is actually similar to Allen’s mid to late 1990s films (at least to me).

Set in New York City, the film focuses on Boris Yellnikoff (Larry David), a 60-something man who has failed at his career, his marriage, and a suicide attempt (which left him with a limp). A world-class grouch, Boris makes a living teaching chess to children he constantly insults. He spends his days irritating his still-loyal friends with his never-ending tirades about the worthlessness of absolutely everything and everybody. He proclaims himself a genius because he was almost nominated for a Nobel Prize in physics.

One night, Boris finds Melodie St. Ann Celestine (Evan Rachel Wood), a simple-minded, 21-year-old, Southern belle lying near his doorstep. Boris lets Melodie stay the night, but she eventually “convinces” him to let her live with him until she can get settled financially. While Melodie tries to get to know him, Boris responds to her lack of intellect with sarcasm and insults, but their relationship turns serious. Then, separately, Melodie’s mother, Marietta (Patricia Clarkson), and father, John (Ed Begley, Jr.), arrive in town, bringing chaos back into their daughter’s new life.

Thirty-five years ago, the subject matter of Whatever Works might have been considered scandalous to movie audiences of that time. Now, the following elements: a gay couple, a ménage à trois, a mother trying to find a new lover for her daughter, a misanthrope married to a woman four decades his junior, and mocking self-righteous Christians (among other things) may still be controversial to some, for instance, right wing Evangelicals who go to Rentboy.com to hire a travel companion. However, these things really don’t warrant much attention for those of us who watch a lot of movies. Boris even “breaks the fourth wall” by talking directly to us, the audience, but that also feels like an empty gesture which does little for the story.

Because the screen chemistry between Larry David and Evan Rachel Wood is so tepid, however, Whatever Works needs a ménage à trois to kick start the narrative. The first 40 minutes of this film are dull, and it is not until Melodie’s mother Marietta appears that the story perks up. Woody Allen spends the remaining 50 minutes of the film cramming in the pithy comedy, sparkling social critiquing, and zany romance audiences have come to expect from his films. Still, shoving all the best sub-plots and character bits into the last half of the film makes Whatever Works seem rushed and hurried.

Many of Woody Allen’s films have a neurotic intellectual as the central character, usually with Allen playing that role. Sometimes, Allen casts another actor to play the part, as Larry David does here. David gives an uneven performance that makes Boris sometimes ridiculously shrill. That is a shame because the other performances are good, even though the characters the actors have to work with are not well developed, the fault of the writing. Still, the cast manages to give this film a good-natured vibe that is endearing. They make a mediocre film a little better, and the cast may also make you wish that you could spend more time with them.

At the beginning and the end of the film, Boris breaks the fourth wall to tell us his basic philosophy about life, “…whatever love you can get and give, whatever happiness you can filch or provide, every temporary measure of grace, whatever works.” In order to enjoy Whatever Works

, grab whatever joy you can filch.