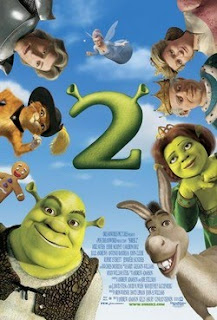 I found Shrek 2 to be every bit as funny as the original, but I don’t think it’s quite as surprising or better than the smash hit and Academy Award-winning Shrek. The first film was sweet and sentimental, and despite it’s clunky and peculiar computer-generated animation, it was fresh and different. Shrek 2 is every bit the expensive and glossy sequel, and is mostly disposable entertainment. In fact, the filmmakers have managed to make a movie so entertaining that it’s disposable entertainment as art. I laughed a lot and had a damn good time, but as I do with many big summer films, I’d mostly forgotten it not long after I’d left the theatre. There’s nothing wrong with that, but Shrek 2 is like a cheap candy bar, sweet but not necessary. You can wait for home video.

In Shrek 2, the titular Shrek (Michael Myers) and his wife Princes Fiona (Cameron Diaz) with Shrek’s homeboy Donkey (Eddie Murphy) travel to Far, Far Away, Fiona’s home to meet her parents the King (John Cleese) and Queen (Julie Andrews). The royal parents, however, are not happy to see Fiona married to an ogre, which is what Shrek is, and they’d hoped she’d married Prince Charming (Rupert Everett).

It was Charming who was supposed to rescue Fiona in the first film (and not Shrek as it happened) and break the spell that caused Fiona herself to become an ogre at night. Now, that Fiona has married Shrek, she’s a full time ogre. Charming’s mother, the Fairy Godmother (Jennifer Saunders) demands that the King get rid of Shrek, so he hires a suave assassin, Puss In Boots (Antonio Banderas), to dispatch Shrek. But when Puss becomes Shrek’s friend, Fairy Godmother throws all her magic behind a diabolical plan to trick Fiona away from Shrek and into the arms of her son.

I found Shrek 2’s humor mainly directed at adults, although children can certainly enjoy it. Much of the comedy is built around sight gags, but there are numerous sly cultural references (visual and spoken), witty asides, puns, etc. that will go right over the heads of the kids and many 20-somethings. There is also a surprising amount of sexual innuendo and crude humor. Once again, I think this film is aimed more at adults than children, much like the old Warner Bros. cartoons from the 1930’s and 40’s. They were originally made as theatrical shorts to be shown before films and weren’t specifically aimed at children just because the shorts were cartoons.

Technically, Shrek 2’s animation is much improved over the first film, but PDI, the company that animated both Shrek films has nothing on Pixar, the studio behind Toy Story

. There is a crucial difference between Pixar and PDI. Pixar does computer animation in the tradition of Disney animated classics: animated films that are fairy tales aimed at children, but also appeal to adults who are “young at heart.” PDI creates broad PG-rated films that attract kids simply because they are animated but are also written to attract adults with rough humor and sarcasm.

The standout voice talents in the film are Eddie Murphy, John Cleese, and Jennifer Saunders. Their performances are what we would expect of actors that are both fine comedians and comic actors, and they are really good at adapting their particular talents for virtually any kind of comedy.


Posted by Leroy Douresseaux at 7:44 AM