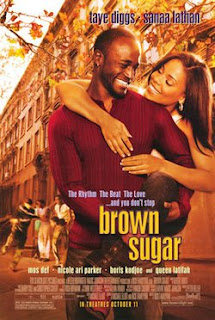 ROMANCE with elements of drama

National Basketball Association legend Earvin “Magic” Johnson entered the world of filmmaking as executive producer in what 20th Century Fox billed as a hip-hop romance, Brown Sugar. The truth of the matter is that the hip-hop has very little to do with the romance other than being window dressing. The fact of the matter is that Brown Sugar is actually a nice romance.

Dre (Taye Diggs) and Sidney (Sanaa Lathan, Love & Basketball) have been friends since childhood. Dre is a successful record executive and Sidney wrote articles on hip-hop music for the Los Angeles Times before moving on to run XXL magazine. They’re each other’s best friend, sharing the good times and the bad and sharing gossip and the intimate secrets of their lives. They only once came close to consummating their deep friendship as serious love, but avoided it. However, when Dre rushes into marriage with Reese (Nicole Ari Parker, Remember the Titans), a high society money girl that he hasn’t known very long, Sidney has mixed feelings, and her deeper love for Dre begins to surface.

) and co-writer Michael Elliot seemed determined to make a film that’s simply about romance in which hip-hop is as important to the story as the romance is. Both characters are obviously big fans of hip-hop; both their careers are built around it. The writers even have the characters mouth platitudes about how great hip-hop is. But no matter how much they talk about hip-hop, rap music, or whatever you want to call it, the story of the film is about two friends finally succumbing to the love they have for each other that they both denied for so long, a denial that has one in a bad marriage and the other about to enter into one. The hip-hop love jones is strained and forced, and it severely hampers the romantic center of this movie; the love story is natural and flows.

or When Harry Met Sally

, but Brown Sugar is good. It’s not perfect, but when I was growing up, films like this simply didn’t exist. They couldn’t; racist Hollywood didn’t want to make them, and the beast always claimed that there was no audience for such a film. Well, there’s always an audience for good films; it may not be as large as the audience for Titanic

, but people will find a good movie.

I must say that the performances outshine the film. Taye Diggs is a good actor, and he has the stature and emotional range to play a leading man. Can’t you just see how much fun he would have been in something like Boomerang? Ms. Lathan is new to me, but I like what she has to offer. She easily skates through her character of this soft script, managing to be a comedian, a heroine, and a lovelorn professional gal just looking for true love. Queen Latifah adds spark to this film, although her part is quite small, but her hip-hop colleague, Mos Def, is another find. He played the sidekick very well, and he manages to be “real” as a hip-hop artist without once calling a bitch a ho or threatening to peal a nigga’s cap back. He’s a natural, quite comfortable on screen, and I hope to see more of him.

If Magic Johnson has more films like Brown Sugar up his sleeves, by all means, he should go to fewer Laker games and more studio briefings.