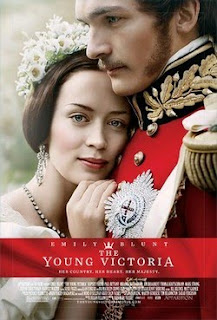 Some period dramas are classy affairs. They are pretty to look at because of the lush production values, from sumptuous costumes to lavish sets. They can also be quite boring. Then, there are period dramas like the Oscar-winning Dangerous Liaisons

and Shakespeare in Love

, which are beautiful and lavish productions. They are also highly entertaining. Seeing them is to understand why some critics and reviewers sometimes describe movies as “delicious.”

The Young Victoria is one of those tasty period dramas. This film boasts an impressive list of producers, including Martin Scorsese, Graham King, and Sarah, Duchess of York (among others). It is a romantic dramatization and partly fictional account of the events preceding and following the coronation of Queen Victoria.

The 18-year old British royal, Victoria (Emily Blunt), is destined to ascend to the throne because her three uncles, the sons of King George III, do not have any surviving legitimate children. As her uncle, King William IV (Jim Broadbent), nears death, people plot to control Victoria. Victoria’s mother, Duchess of Kent (Miranda Richardson), and her private secretary, Sir John Conroy (Mark Strong), bully Victoria to allow them to form a regency government, which would put them in control, but she resists.

Meanwhile, her uncle, King Leopold I of Belgium (Thomas Kretschmann), plots to influence the future queen by marrying her to one of his nephews, Prince Albert (Rupert Friend), who is also Victoria’s cousin. Albert is willing to court Victoria solely for political motives, but he soon finds himself falling for her. However, Victoria is determined to rule as her own woman, but a constitutional crisis forces her to reconsider her feelings for Albert.

When Emily Blunt delivered her acclaimed performance as “Emily Charlton,” the snide assistant to Miranda Priestly in The Devil Wears Prada

, many thought she was a star in the making. Blunt, certainly a fine actress, delivers on that promise in The Young Victoria, and she depicts all sides of the young Queen with aplomb and skill. Blunt’s performance is rich, and she gives Victoria such depth, presenting the young royal as playful, petulantly, brave, grim, and even romantic as Victoria finds her heart ensnared by Prince Albert.

Director Jean-Marc Vallée relies on Blunt because it is her performance that sells the political intrigue. Although the romance between Victoria and Albert is nice, The Young Victoria is really about palace intrigue, political machinations, and the lust for power. Vallée deftly uses all the scheming offered by Julian Fellowes’ screenplay to transform what could have been a staid period drama into a rollicking costume drama. Laugh at the scandal; gasp at the political scheming, and cry at the romance and reconciliation.

Marked by good performances throughout – especially Paul Bettany as Lord Melbourne and Miranda Richardson as Duchess of Kent, The Young Victoria relies less on subtlety and more on power – the power of the darker side of human nature – lust and wanting after power and control. The Young Victoria reveals that royalty is just like rabble. Both will stab you in the back; the royals are just better dressed. Yes, being bad looks so good on film.