"The Dark Knight" Rose Above All Other Batman Movies 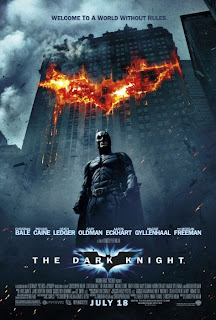 Director Christopher Nolan’s The Dark Knight, the sequel to his 2005 film, Batman Begins, is indeed as good as practically everyone who has seen it says. The Dark Knight is both loud and complex, sometimes as scary as it is over the top, but the heart of the movie isn’t loud explosions and violent confrontations. For all the attention paid to this film’s villain, The Joker as portrayed by the late Heath Ledger, Nolan uses The Dark Knight to examine the heart, soul, and guts (constitution) of a hero, in particularly both the character Batman and his alter ego Bruce Wayne.

However, their success is short lived, when The Joker (Heath Ledger), a rising criminal mastermind, inserts himself into the situation. The Joker practically bullies Gotham’s crime lords into hiring him to kill Batman. The Joker’s antics throw Gotham into anarchy, and his acts of terrorism force the Dark Knight and everyone one around him ever closer to crossing the fine line between hero and vigilante.

So many things stand out as being exceptional about The Dark Knight. The story by Christopher Nolan and David S. Goyer, who wrote Batman Begins together, is quite fine, but the script by Nolan and his brother Jonathan Nolan is the cream on top. For one thing, it takes four of Batman Begins’ excellent supporting characters, Jim Gordon, Lucius Fox, Bruce Wayne’s butler, Alfred (Michael Caine), and Rachel Dawes (Maggie Gyllenhaal, but previously played by Katie Holmes in Batman Begins). Not only does the script emphasize their connections to Batman, but all four of the characters also genuinely contribute to the action, ideas, and philosophies of the larger narrative. When four fine actors (with Caine and Freeman being Oscar-winning legends) get this kind of character writing, they can work wonder – as they do here.

As for the much-talked about performance of the late Heath Ledger as The Joker, it is the real deal. Topping Jack Nicholson’s turn as the clown prince of crime in the 1989 Batman seemed impossible, but Ledger simply took the character someplace even darker. Ledger’s Joker isn’t just a criminal; he’s an anarchist, a terrorist, and a madman. He eschews society’s morals, rules, and excepted standards of behavior. To hell with society; he just wants to see the world burn. That kind of personality and behavior will always be the makings for a memorable villain, but Ledger takes that material and turns it into a Joker the he sears into the audience’s memory.

For all the fireworks of Heath Ledger’s performance, The Dark Knight is, in the hands of Chris Nolan and actor Christian Bale as Batman, about Batman’s battle for his own soul. Together, Nolan and Bale test the limits of endurance of a superhero. Batman’s bravery isn’t in question, but his honesty, integrity, morals, and honor are. Will he go to the “dark side,” so to speak, and thusly, himself become a villain in order to fight villains (Joker and his crime lord cohorts)? Is he a warrior sworn to uphold values of courage and honor or is he just like weaker mortals – people who are all too ready to drop their civilized ways and become monsters the moment something really terrifies them?

Like Batman’s conundrum, The Dark Knight is ominously complicated, but it is so damn entertaining and intelligent and thought provoking and better than most summer blockbusters and superhero movies could hope to be. The Dark Knight is by no means perfect; sometimes, it goes over the top trying to make its points. Sometimes, it’s way too loud and maybe just a bit too pretentious and heavy with its own self-importance. But it’s still so damn good.


2009 Golden Globes, USA: 1 win: “Best Performance by an Actor in a Supporting Role in a Motion Picture” (Heath Ledger – Awarded posthumously with the award accepted by Christopher Nolan on Heath Ledger's behalf)
Posted by Leroy Douresseaux at 7:52 AM