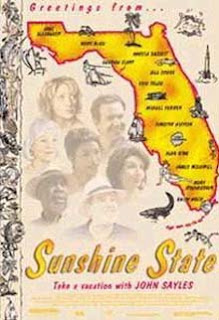 The subject of this movie review is Sunshine State, a 2002 drama (with humorous undertones) from director John Sayles. An ensemble character drama, the film has subplots about family secrets, race relations, romance, and commercial property development.

Watching a John Sayles movie is to observe the work of a genius. Of course the word is often misused and overused, but not in John’s case. He is a genius film director. Very few directors could write the kind of dense character pieces that he does with so many players and still make the resulting film visually absorbing. That is what the master does yet again in his 2002 film, Sunshine State.

As usual, when a Sayles film begins, there is already a lot of backstory. The characters have highly involved lives before we fade in to the first scene, so we essentially come into a story that’s already begun. In a northern Florida coastal town, encroaching land developers force the separate lives of the town’s residents to intersect as the developers make a hard sell, by hook or by crook, the buy the land which they intend to transform into a swanky residential and resort area.

Old family business also rears its head for the two female leads. Desiree Perry (Angela Bassett) returns to visit her mother, Eunice Stokes (Mary Alice). Desiree left decades earlier because of an unwanted pregnancy and because she had a hard time living up to the public legacy of her father. She returns with her husband, Reggie, to find her mother now responsible for a troubled young relative (Alex Lewis) and seemingly nursing a grudge against her daughter.

Meanwhile, Marly Temple (Edie Falco) manages her father Furman’s (Ralph Waite) restaurant and hotel, but she’s ready to give it up. She listens to the slick and deceptive deals of the land developers and falls for one of their employees, a wandering landscape architect (Timothy Hutton).

Sayles’s film is a complex, but yet straightforward story, that details the complicated issues of business and of family business. You almost need a scorecard to keep up with all the characters, but Sayles creates a rhythm with his plot and story that a patient and savvy viewer will eventually catch. Visually, it’s like a shell game, but once you catch onto who is who, who is connected to whom, who wants what, you get a grasp on the film. After a while, you even have a good idea of the motivation of even the bit players. Sayles’s films are verbose, but not like those pretentious uppity foreign films, especially those high-falutin’ British period pieces. The spoken accentuates the visual. The better you understand the dialogue and that it’s communicating the story to you, the easier it is to watch the movie.

The acting is quite good all around. Many viewers are already aware of Angela Bassett’s dramatic prowess, but Ms. Falco, mainly known for “The Sopranos” is a revelation here. Her Marly Temple is one of the best performances by an actress, lead or supporting, in 2002, and one of the best in last few years. Like many of those earlier excellent performances, Oscar passed Ms. Falco by even for a nomination.

For many complex business and socio-political reasons, not excluding his talent, Sayles continues to create some of the best ethnic characters currently seen in popular cinema, especially African-Americans. Many black directors and writers show less affinity than Sayles in creating complex, three-dimensional black characters. Many black filmmakers are content to churn out the same drivel as the rest of the film industry except they populate their movies with cardboard, stereotypical Negroes.

As usual, a Sayles film ends before the story is “over.” He’s given us a small slice in the long rich lives of his characters who are so seemingly alive that they might just live on past the end credits. Sunshine State is John Sayles best film since Lone Star, in which he also takes the same lovingly novelistic approach to the story. It’s a career highlight from the oldest and the strongest maverick filmmaker in America. He’s the last great independent spirit, and by remaining so, every few years, he gives us a work of simple brilliance.