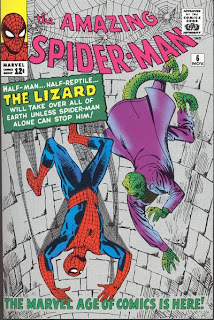 The Spider-Man film franchise reboot, The Amazing Spider-Man, is just hours away from releases to theatres (as I write this). That’s why I decided to go back to the comic book beginnings of the new film’s villain, The Lizard. Writer Stan Lee and artist/co-writer Steve Ditko introduced The Lizard nearly 50 years ago in The Amazing Spider-Man #6, which had a November 1963 cover date.

The Lizard is Dr. Curtis “Curt” Connors, a reptile expert who works in the Florida Everglades; he also lives there with his wife, Martha, and son, Billy. He had been a surgeon who enlisted in the U.S. Army and performed surgery on wounded GIs during the war (probably the Korean War). During his time in the service, Connors’ arm was injured and had to be amputated.

Years later, as a research scientist, Connors began to develop a serum that could restore missing limbs and organs. Connors was basing his research on certain kinds of lizards that had the ability to re-grow lost limbs. He finally developed a serum, which he tested on himself. While his lost arm did grow back, Connors subsequently transformed into a reptile humanoid monster that was super-strong and had a nearly impenetrable hide.

The Amazing Spider-Man #6 (entitled “Face-to-Face with the Lizard!”) opens with the Lizard making his fearsome first appearance by chasing a trio of hunters from a swamp that he has claimed as his own. Back in New York City, Spider-Man is reading the front page of the newspaper, the Daily Bugle, upon which there is a headline that challenges Spider-Man to defeat the Lizard. Of course, the challenge comes from J. Jonah Jameson, Spider-Man hater and the publisher of the Bugle, where Spider-Man’s alter-ego, Peter Parker, is a freelance photographer.

Parker wants to get down to Florida to investigate the Lizard, but he can’t afford to buy a plane ticket. Using his Spider-Man identity, he tricks Jameson, who refused the first time Parker asked, to agree to finance the trip. The trick turns on Parker when Jameson insists on accompanying him. Once in Florida, Parker ditches Jameson, switches to Spider-Man, and heads to “the Lizard Area.”

Using his scientific knowledge, Spider-Man amazingly concocts an antidote to the serum that created the Lizard. Time is running out for Spider-Man because the Lizard is about to dump Connors’ serum into the swamp, which will turn the countless reptiles living there into monsters like the Lizard. Unable to match the Lizard’s strength and power, Spider-Man uses his speed and his wiles to defeat the villain and to administer the serum to him. Shortly after swallowing the serum, the Lizard transforms back into Dr. Connors.

Parker rejoins Jameson who is furious that the young man disappeared on him. Jameson even tears up the photographs of the Lizard that Peter took. Back home, Peter finds that his bad luck has not changed, but he takes it in stride.

I have lost track of how many times I’ve read The Amazing Spider-Man #6 (as well as other early issues of the series). Steve Ditko and Stan Lee offered what amounted to an epic in 21 pages. Today’s comic book writers would take the single issue that is “Face-to-Face with the Lizard!” and turn it into a six-issue story arc, with each issue containing 20 to 22 pages of story. A smart director and screenwriter(s) could turn “Face-to-Face with the Lizard!” into an entire movie.

Ditko, who drew the story from a plot by Lee, draws most pages containing eight to nine panels; even pages with action sequences have six panels. All those panels make for a story that moves rapidly, compacting the story in small spaces so that it strains to break free. Reading it, I can feel all the energy that wanted to burst forth. This is the comic book in its purest form.

I heartily recommend reading “Face-to-Face with the Lizard!” to any Spider-Man fan, whether they have ever read comic books or not. It is available in both paperback and expensive hardcover collections.
Posted by Leroy Douresseaux at 1:39 PM