Madea's Witness Protection: The Lighter Side of Madea 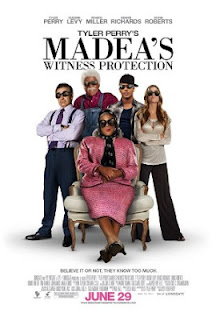 Enter Brian’s aunt, Madea (Tyler Perry), who reluctantly opens her home to the Needlemans. Brian’s father, Joe (Tyler Perry), even discovers that he has a past connection with George’s mother, Barbara (Doris Roberts). The Needlemans’ problems, however, extend beyond George’s work troubles. Will they find that help in Madea’s wild and crazy southern home?

Tyler Perry’s Madea movies usually have two dominate plots or storylines. First, there is the storyline that depicts the antics of Madea the co-lead. The second is a melodrama, usually focusing on a female character who struggles to overcome a number of external obstacles and internal conflicts. Madea’s Witness Protection does not follow that formula. Madea’s antics are directly tied to the second main character, which is George Needleman. George’s story cannot move forward without Madea, so this is truly a “Madea movie.” It is also a bit of a stretch to sell Levy (who is 65 as I write this) as a 52-year-old man, which is George’s age. Otherwise, Levy does his usual schtick as the pitiful, put-upon, straight-laced white guy to polished perfection.

Tyler Perry in this triple role as Madea, Joe, and Brian is on automatic, although he plays Brian with self-assuredness that I don’t remember seeing before this movie. His performance as both Madea and Joe is also smoother than in earlier films. The Madea of Madea’s Witness Protection is also a lot less overbearing, not as rough, and less edgy than in films like Diary of a Mad Black Woman and Madea’s Family Reunion. Joe is also a lot less vulgar, not quite the dirty old man, and is certainly less untidy that in earlier films.

Madea’s Witness Protection features a Madea that is cuddlier, if such a thing is possible. She’s like a Motown spit-shine on some hollerin’ blues. She will still knock you out, but she’s ready to give you a hug and for her place in the mainstream. Madea’s Witness Protection is good, and Madea is as funny and as crazy as ever. Are we ready, however, for a Madea who goes down so smoothly?