Halle Berry a Mess in the Hot Mess that is "Catwoman" 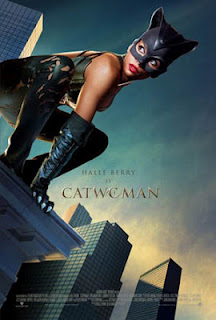 SUPERHERO/CRIME with elements of action

The subject of this movie review is Catwoman, the 2004 American superhero film starring Halle Berry. Berry stars as a character inspired by Catwoman, the DC Comics thief, anti-hero, and sometimes love interest of Batman. Upon its initial release, Catwoman was poorly received by critics and fans of the character, but some of those fans hated the film before it was released because a stunningly gorgeous woman of color, Halle Berry, was playing a character depicted as white in the comic books.

Patience Philips (Halle Berry) works for the behemoth cosmetics company Hedare Beauty. It’s a thankless job, and instead of pursuing a career as an artist, she designs cosmetic advertisements that her tyrannical boss, George Hedare (Lambert Wilson), hates. The woman who won’t stand up for herself eventually experiences a fateful turn of events. She overhears that Hedare’s soon-to-be-launched new anti-aging cream, Beau-line, is dangerous to users and is murdered to keep that fact secret.

Mysterious forces then resurrect Patience with the heightened strength and agility and ultra-keen senses of a cat. Suddenly, Patience is Catwoman, a sexy and seductive creature of the night, straddling that proverbial line between good girl and bad ho. Tom Lone (Benjamin Bratt), a tall, dark, and handsome cop, is on the trail of the Catwoman, and he’s also hot for Patience. Get a clue, flat foot! Catwoman ain’t the criminal. She’s after the real dark force behind Hedare, and it just might be George Hedare’s icy, supermodel wife, Laurel (Sharon Stone).

Directed by Pitof, Catwoman is a thorough mess. The film starts out flat, but with some hope, and only gets worse. Frighteningly dull and irritating clunky, the film is one of the worst movies of the year. And I am disappointed to say that because I’d been hot to see this since I first heard that Ms. Berry had been cast to play Catwoman. The film’s biggest problem may be that it focuses too much on the Patience Philips/Catwoman character, who isn’t very interesting or appealing. The focus on the lead player is a single-minded vision of disaster, because if the other characters had been fully developed, they could have been a diversion from a less interesting lead. As it is, the supporting characters only range from vaguely interesting to cardboard cutouts.

The poorly conceived special effects, the (lack of) directing, the flat acting, the hideous music, the too-fake-looking CGI fight scenes, and Halle Berry’s totally unsexy demeanor make this a dud. Stay home on this one, folks.