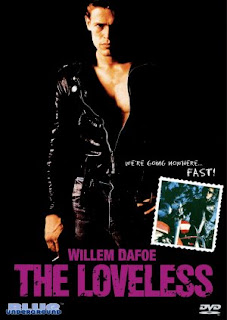 The subject of this movie review is The Loveless, a 1982 outlaw biker drama. The film is notable for being the actor Willem Dafoe’s debut as a lead and for also being the first feature film by Kathryn Bigelow (The Hurt Locker). According to the Internet Movie Database, The Loveless appeared in film festivals in 1982 and was released theatrically in the United States and Sweden in 1984.

Leather-clad biker, Vance (Willem Dafoe), leads a group of fellow leather-clad bikers who make a pit stop in a backwater Georgia town en route to a stock car race in Daytona, Florida. While waiting for one of their bikes to be repaired, the gang takes a measure of the town and finds it woefully wanting. On the other side of this equation, some of the townsfolk, from a distance, grudgingly admire the bikers’ freedom. There are also a few troublemakers, and one of them, Tarver (J. Don Ferguson), looks to bring this story to an explosive conclusion.

The Loveless was Willem Dafoe’s film debut, and it was also the first feature film directed by Kathryn Bigelow (who actually co-wrote and co-directed this with Monty Montgomery). Bigelow would go onto to direct such films as Near Dark, Point Break, and Strange Days (in addition to being married to James Cameron for two years). The Loveless is a stylish ode to the Marlon Brando film, The Wild One. It’s violent, a little randy, and its mood perfectly captures the essence of an isolated Deep South hamlet stuck in the past, suspicious of strangers and all things different. Incest, bigotry, prejudice, and murder, The Loveless delves into Southern Gothic while worshiping the post-World War II era biker in a languid, sensuous fashion.

The film’s pace and acting style recalls pre-method acting Hollywood films. The performances are very affected in that stage acting manner of movies of old Hollywood. Dafoe gives one his sexiest performances. Dangerous, young, and reeking of raw sex, he wouldn’t appear like this again until 2002’s Spider-Man. The Loveless isn’t great, but its raw, almost amateurish atmosphere and execution is mesmerizing.