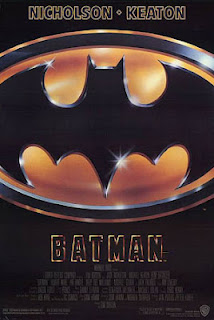 The subject of this movie review is Batman, the 1989 superhero movie directed by Tim Burton. It was the first film in the initial Batman film series, which ended with 1997’s Batman and Robin, before being rebooted with Batman Begins (2005).

Although Warner Bros. had a “Batman” movie in various stages of development for most of the 80’s, the 1989 box office smash Batman was not green lit for production until the film Beetlejuice became a hit. In 1985, Warner Bros. chose Tim Burton, the director of Beetlejuice, to helm the long planned Batman after his first theatrical feature, Pee Wee’s Big Adventure, became a box office hit. However, when Beetlejuice’s also became a hit, that success that made Warner Bros. realize that Burton was definitely a director who could make box office hits, and being that Warner was putting so much money into Batman, they needed it to be a hit. Comic book fans raised (un)holy hell over the choice of Burton to direct and Burton’ selection of Michael Keaton to play Bruce Wayne/Batman. Warner Bros. toyed with and appeased their nerdy emotions by regularly releasing Batman movie trailers and other sneak peeks of the film. The choice of Jack Nicholson to play the Joker also got people excited (and quieted angry comic book nerds), and the film went on to be a huge hit.

Gotham City has been astir with rumors of a giant bat, called The Bat, by criminals who claimed that it attacked them; indeed, the mysterious figure is said to prey upon Gotham’s criminal underworld. This figure is actually a costumed hero who calls himself Batman (Michael Keaton), and he gradually comes out of the shadows to investigate the criminal operation of Gotham’s chief criminal, Carl Grissom (Jack Palance). During a police showdown with Grissom’s thugs, Batman causes the apparent accidental death of Grissom’s chief enforcer, Jack Napier (Jack Nicholson). Napier, however, is not dead; nearly-drowned in strange chemicals and scarred by a bullet, he emerges from the shadows as the homicidal and clown-like, The Joker (Nicholson), and begins a murder spree against his rivals for control of the city’s criminal underworld. The Joker also initiates a crime spree on the city as Gotham prepares to celebrate its 200th birthday. Meanwhile, Batman’s secret identity, Bruce Wayne (Keaton), is trying to figure out a way to stop The Joker, while a lovely reporter, Vicky Vale (Kim Basinger), shows interest in both Wayne and Batman.

This movie is a large plot-less beast that meanders into its third act. The movie even starts off with a cacophony of countless actors mouthing awkward sounding dialogue. Keaton is unconvincing as either Bruce Wayne or Batman. Kim Basinger struggles with role made gimpy by a script that treats her like a typical action movie girl-attached-to-the-hero, one the filmmakers only grudgingly accept as necessary. Tim Burton’s signature gothic and darkly comic fantasy hardly ever shows in this film; this is mostly a Tim Burton film in name only. However, Jack Nicholson takes the script and elevates it. Except for a few hammy moments, he’s brilliant and his delivery brings his lines to snappy life.

Compared to the recent Batman Begins, Batman 1989 doesn’t hold up, but the two films are actually quite different in tone and style. This Batman is a combination of the wrong ingredients or at least incorrectly measured ingredients (from director and cast to the music and other production elements) plus a big helping of Jack Nicholson’s miraculously funny performance; both make this an average and (for reasons unknown to me) curiously entertaining film.