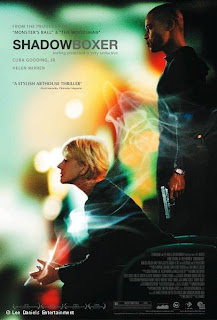 The subject of this movie review is Shadowboxer, a 2005 crime thriller directed by Lee Daniels. After the film’s theatrical release in the summer of 2006, two of its stars would go on to win Academy Awards, Helen Mirren and Mo’Nique, and one had already won an Oscar, Cuba Gooding, Jr.

Clayton (Stephen Dorff), a nasty crime lord, hires the assassin Rose (Helen Mirren) and her stepson/partner/longtime lover, Mikey (Cuba Gooding, Jr.), to kill his wife, Vickie (Vanessa Ferlito), whom he believes is cheating on him. However, during the hit, Rose, suffering from cancer and on her last job, discovers that Vickie is pregnant and hesitates. Vickie immediately goes into labor and delivers a son. Rose takes mother and newborn and flees with Mikey to a new life in a pastoral suburb. Soon, the baby is seven-year old Anthony (Cullen Flynn Clancy), and the past is about to catch up with this unconventional family.

Shadowboxer is an audacious, unconventional thriller. Director Lee Daniels and writer William Lipz create a crime thriller than can masquerade as a family melodrama. This flick, however, has an awkward pace. Sometimes it is slow, and other times it is a meditative tale that shadowboxes with being philosophical – philosophy that it delivers either through imagery or dialogue. (Mikey religiously practices shadow boxing.) Shadowboxer’s overarching plot is a crime thriller tale full of cold, ruthless murderers, thugs, criminals, and assorted lowlifes, but it often comes across as low budget thriller with most of the actors merely posing rather than acting. The bad guys and badasses come across as stock characters, or maybe the direction they received for their performances was too artsy.

Shadowboxer doesn’t have any great or even really good performances, but this strange off-kilter flick spends the second half builds into a story of an unconventional family coming to grips with itself. The fact that the family members can be a workable nuclear family (even though this merger wasn’t meant to be) only makes seeing things work out that much more desirable. Rooting for this desperate, but loving family makes Shadowboxer’s narrative, pacing, and structural problems all less important.