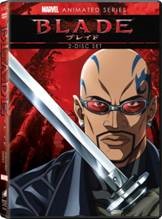 Catch some of Marvel’s most dangerous Super Heroes when Sony Pictures Home Entertainment and Marvel Animation release BLADE ANIME and WOLVERINE ANIME on DVD July 31st. The two-disc sets will include all 12 episodes from each series, with epic battles and action-packed storylines, as well as six all-new featurettes. The series are guided by The New York Times best-selling author Warren Ellis (Iron Man: Extremis, Astonishing X-Men: Xenogenesis), and produced by Madhouse for Marvel Television and Sony Pictures Entertainment Japan (SPEJ). Sony Pictures Home Entertainment is the distributor.

BLADE ANIME features the voice of Harold Perrineau (TV’s “Lost,” Matrix trilogy) as Eric Brooks, otherwise known as Blade. The three new featurettes on this two-disc set include The Marvel Anime Universe: Blade Re-Awakened, which explores the process that went into developing this new take on the vampire-hunter. Other featurettes also include Blade: The Vampire-Slayer, comparing Marvel’s Blade with traditional vampire stories, and Special Talk Session: Marvel Anime's Blade and Wolverine, an interview with series creators.

BLADE ANIME SYNOPSIS: Eric Brooks – known as Blade - seeks revenge on Deacon Frost, the vampire who killed his mother while she was still pregnant with him. With all the powers of a vampire and none of their weaknesses, Blade's quest leads him throughout Southeast Asia in search of Frost. In the Golden Triangle, he discovers a vampire plot that threatens to take down the whole world.

WOLVERINE ANIME SYNOPSIS: The love of Logan’s life, Mariko Yashida, is taken back to Japan by her father Shingen, a notorious crime lord. Once in Japan, she is forcibly betrothed to Kurohagi, a cruel criminal associate of her father, to solidify their business interests. Logan is determined to get her back, yet is plunged into a tangled web of corruption and violence at every turn. But with the help of young assassin Yukio, he just might manage to claw his way through the criminal underworld to confront Shingen and save Mariko.