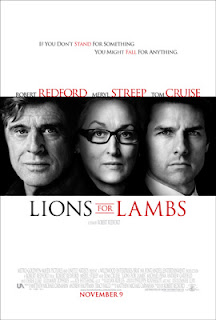 Lions for Lambs is a 2007 drama from director Robert Redford. The film stars Redford, Meryl Streep, and Tom Cruise in a story that connects the actions of a veteran television reporter, a powerful U.S. Republican senator, a college professor, and a stranded platoon of soldiers trapped in Afghanistan.

Tom Cruise re-launched United Artists as viable movie studio with Lions for Lambs, the Robert Redford-helmed look at America's “War on Terror.” Using a complex three-pronged narrative, Redford (who also stars in this film) connects the lives of the movie’s characters by politics and bloodshed. While a young, but powerful Washington senator goes toe to toe with a reporter, who on the down side of her career, on the issue of U.S. troops in Afghanistan and Iraq, an idealistic professor and Vietnam veteran tries to keep a promising student engaged, while two of his former pupils struggle to survive behind enemy lines in Afghanistan.

At an unnamed California university, the anguished Professor Stephen Malley (Robert Redford) calls Todd (Andrew Garfield), a talented, but aimless student who usually misses class into his office for a heart to heart conversation. Malley is trying to reach this privileged, but disaffected student to hopefully encourage him to do something to make change rather than just be cynical about the current state of affairs. Two of Prof. Malley’s students volunteered to join the U.S. military and now serve with Special Forces in the “War on Terror.” This bold decision by Arian Finch (Derek Luke) and Ernest Rodriguez (Michael Peña) has left Malley both moved and distraught, but he wants to share their determination to make a difference with Todd.

Unbeknownst to Malley, Arian and Ernest are stranded on a snowy mountainside in Badakhshan, Afghanistan as Taliban fighters move in and their commanders struggle to get them out.

Meanwhile, charismatic Presidential hopeful, Senator Jasper Irving (Tom Cruise) is giving probing TV journalist Janine Roth (Meryl Streep) a bombshell of a story, as the two go toe to toe over the “War on Terror.” Sen. Irving has used his influence to launch a new phase in the war in Afghanistan – one that will affect the fates of Arian and Ernest, as arguments, memories, and battle weave these three stories ever more tightly together.

Much has been made of the lack of success at the box office of films dealing with Iraq (Rendition, In the Valley of Elah), which is really no surprise considering how disconnected so many Americans are from the “Global War on Terror,” not to mention how unpopular the Iraq War is among Americans and in other nations. This unpopularity and lack of connectivity is precisely why a film like Lions for Lambs is so important. Lions for Lambs is so indicative of our current state of affairs as Americans as to be painful. No wonder the film received mostly middling to negative reviews and was a dud at the box office. Like Spike Lee’s scandalous 1987 film, School Days, Redford’s film insists on throwing the painful but necessary truth in our faces, and so many Americans would rather be chasing the latest consumer toys or obsessing over meaningless pop culture tittle-tattle. It has been said that Lions for Lambs is too “talky,” supposedly a handicap for a film.

Lions for Lambs does talk a lot, but it has something to say and we should be listening.

Still, Cruise (who gives the film’s best and sharpest performance, by far) and Streep arguing history, politics, and war as a ruthlessly ambitious politician and a jaded reporter, while American servicemen die is a sign of the times. Watching Redford’s old school activist professor trying to get Garfield’s cynical and spoiled rich boy get engaged in change while the student’s classmates shed blood for him is deeply saddening. While Peña’s Ernest and Derek’s Arian are lions in this supposed war for our civilization, the lambs are back home holding the keys to the lions’ fates.

Redford’s film clearly asks that a country embrace a more selfless agenda and do some serious soul searching, instead of acting and lying in our own self-interests. It’s good when a Hollywood movie tackles the national mood and asks tough questions. It means that American cinema still matters beyond being mere corporate product.