"Batman and Robin" or Badman and Rotten 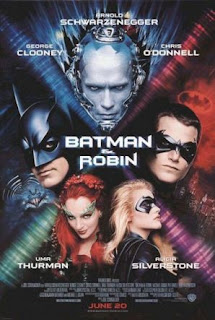 Until there is a fourth sequel, the third sequel to the 1989 box office smash Batman, Batman and Robin will be considered the film that killed the modern Batman film franchise. It’s not as if there is nothing redeemable about this film in particular because it has some good story elements. Batman and Robin is awful simply because it is over-produced. It is as ostentatious as a lavishly decorated and spectacularly colorful Mardi Gras or drag ball.

Batman (George Clooney) and Robin (Chris O’Donnell) face the combined forces of Mr. Freeze (Arnold Schwarzenegger) and Poison Ivy (Uma Thurman). Complicating matters is a rivalry that has grown between the Dynamic Duo. Robin/Dick Grayson wants to do his own thing, and although he understands his young friend’s quest for independence, Batman/Bruce Wayne thinks the young man has a lot to learn, and that he, Bruce, is the teacher, and that the boy should listen. Poison Ivy picks up on this and plays the partners against one another. More trouble arrives in the form of Wayne Manor butler Alfred Pennyworth’s (Michael Gough) niece Barbara Wilson (Alicia Silverstone) who eventually becomes Batgirl.

Everything is overdone in this movie except for the script and the acting, both of which seem neglected. The art direction is as over-the-top sweet as high fructose corn syrup, and the costumes are high camp. Clowns wouldn’t want them, and trick-or-treaters wouldn’t be caught dead in them. The script is poor when it comes to internal logic and consistency. For example, how does Poison Ivy create that ridiculously fancy lair of hers? Where does it come from, and what’s the point of it? It’s just another over-dressed set. I could suspend disbelief if that, along with so much else, just didn’t seem…well, stupid, dumb, and tactless.

The acting is also over the top and bad. At times, Arnold Schwarzenegger seems to revert to the skill (or lack thereof) he showed in his early films. George Clooney, though earnest, is very weak as both Bruce Wayne and Batman. Batman needs to carry the movie, but Clooney struggles with poor material, and that’s made worse by the fact that he doesn’t have a grasp of what he’s supposed to do. It’s like the whole time he was running around the movie wondering just what the hell a “Batman” was. Also, it is high time to drop the use of sexual innuendo is Batman films. It’s not funny, and the dialogue is so hackneyed that these “naughty bits” fall flat when delivered by actors who are already being way too campy. I’m not saying that Batman needs to be so dark and serious, but nor should it be played as a bad joke.

However, there are good elements in the story: Mr. Freeze’s quest to save his wife, Poison Ivy’s machinations against Freeze and the Dynamic Duo, Alfred’s illness, Batman dealing with Robin’s growing pains, and the emphasis on family in the story. But it’s all tossed aside in favor of throwing tons of garish crap against the wall in hopes that something will stick; in the end, almost nothing does. The movie is almost a total failure from top to bottom, and it’s frustrating because it could have been something good. Director Joel Schumacher is not without some directorial skill and screenwriter Akiva Goldsman is one of Hollywood’s top scribes.

What we get in this movie is an overblown and wild spectacle made by people who cynically believed that enough people would pay to see this movie no matter how abysmal it was because they just have to see the next installment in the Batman franchise. And that worked to an extent, but many of their ticket buyers left as unsatisfied customers. If Warner Bros. wants to make shit, it’s no skin of my nose. There are always other action movies, always another action blast out, even if it’s from Warner’s own stable.