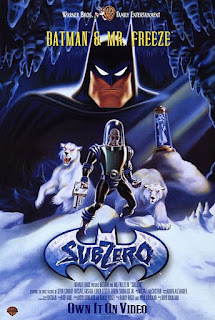 ANIMATION/ACTION/DRAMA/FANTASY with elements of sci-fi

Batman & Mr. Freeze: SubZero is a 1998 direct-to-video animated film that is based on the critically acclaimed Batman animated television series, Batman: The Animated Series. This film serves as sequel to the episode “Deep Freeze” (Episode #84) and the 1993 Batman animated feature film, Batman: Mask of the Phantasm.

I can only guess that Batman & Mr. Freeze: SubZero was meant to be some kind of animated tie-in to the 1997 critical disaster and fan and box office disappointment, Batman and Robin. However, where the latter failed, the former proved to be the better version of Batman and “his family” taking on a super criminals.

Directly released for home video in 1998, this Annie Award winner for “Outstanding Achievement in an Animated Home Video Production,” finds Victor Fries a.k.a Mr. Freeze (Michael Ansara) desperate to discover an organ donor to save his wife’s life. Barbara Gordon a.k.a. Batgirl (Mary Kay Bergman in a high quality voiceover performance) fits the rare blood type needed, so Mr. Freeze and an unscrupulous doctor kidnap her. It’s up to Batman and Robin (Kevin Conroy and Loren Lester) to discover who kidnapped Barbara, why, and where have they taken her, because time is running out.

SubZero, of course, falls in with the popular 90’s animated version of Batman, the popular cartoon TV show, “Batman: The Animated Series” (which actually changed names twice) and its theatrical spin-off, Batman: The Mask of the Phantasm. Like the series and movie, the show has a retro 1940’s and art deco sense to its art direction, with a touch of “the world of tomorrow.” The drama, action, and voice acting is better than the drama, action, and acting in the Batman live action series that began in 1989 and ended in 1997. It’s appropriate for kids and will be a treat for adults who don’t mind watching quality animation that isn’t comedy based. Michael Ansara’s voice performance as Mr. Freeze is particularly distinctive and noteworthy.