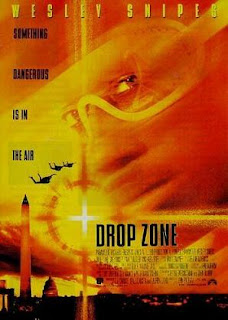 The subject of this movie review is Drop Zone, a 1994 action movie and crime thriller from director John Badham. This film was apparently initially conceived as a Steven Seagal project. Drop Zone stars Wesley Snipes as a U.S. Marshal tracking a team of skydiving crooks led by a former DEA agent.

A thoroughly underrated Wesley Snipes film (and there are several) is Drop Zone. At the time the film was first released, it was expected to be a huge hit, yet it didn’t gross $30 million at the North American box office. However, I think that any viewer who can identify with the character Snipes portrays will find that this movie really resonates for him.

Snipes is Pete Nessip, a U.S. Marshall, who is transferring a prisoner (Michael Jeter) to a safe house with his brother Terry (Malcolm-Jamal Warner) who is also a Marshall. A group of skyjackers stage an impossible prison break on a 747, kill Terry, and kidnaps the prisoner, Earl Leedy (Jeter). There is, however, more to this. Led by Ty Moncrief (Gary Busey), a former Drug Enforcement Agency agent, the skyjackers are actually a band of skydiving crooks that specialize in landing on the roofs of law enforcement buildings and hacking into law enforcement computer systems. They sell the information they get to drug lords. Nessip convinces Jessie Crossman (Yancy Butler), a roguish but loveable skydiving instructor, to help him track down the criminals.

Drop Zone is decidedly low-fi and is more like Snipes earlier hit, Passenger 57, or the Keanu Reaves classic Point Break. It’s a police procedural and crime thriller with some great action scenes. The skydiving stunt work and photography is breathtaking and, in fact, rocks. The acting is good, though a little stiff and over the top, but Snipes, Busey, and Ms. Butler carry the film quite well, especially Busey who does his usual good work as a crazy guy. Kyle Secor is also quite entertaining as the skydiving loony, Swoop, playing excellent comic relief. I give this film a hardy recommendation as a sure fire video rental or as a Saturday home matinee.

Posted by Leroy Douresseaux at 8:28 AM