"The Dark Knight Rises," But the Movie is Bloated 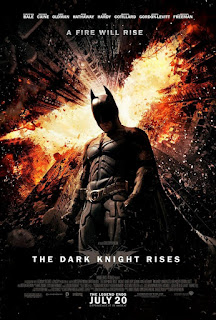 Now, that I’ve seen The Dark Knight Rises, I must admit that I did not like it. In fact, not long into the movie, I was bored with it and, three times I considered walking out of the theatre. The Dark Knight Rises has some interesting ideas, characters, and subplots, but they don’t really come together to form a complete movies. The story elements feel like they are building up to something big; the film is like a constant upsurge of anticipation that never delivers. Too often, scenes ultimately deliver an anti-climax.

The Dark Knight Rises opens eight years after the events that closed The Dark Knight, which saw Batman (Christian Bale) vanishing into the night after he made it seem as if he (Batman) had killed District Attorney Harvey Dent. By assuming the blame for Dent’s demise, Batman sacrificed everything for what he and Commissioner James Gordon (Gary Oldman) both hoped was the greater good. In a sense, that worked. As the film begins, organized crime in Gotham City is dead.

Bruce Wayne (Christian Bale) has given up being Batman and lives in seclusion, but his meeting with Selina Kyle (Anne Hathaway), a cunning cat burglar gets him interested in what is currently happening in the city. Meanwhile, a masked terrorist called Bane (Tom Hardy) has come to Gotham to tear the city down in the name of revolution. Bane’s acts of destruction and terror drive Bruce out of his self-imposed exile, but Batman may be no match for Bane

Although the film runs at nearly 2¾ hours, The Dark Knight Rises did not seem too long to me. It did seem bloated. The film does have some good action set pieces, but they combine to form a movie that is too damned loud and obnoxious. Talk about full of sound and fury, signifying nothing. Speaking of loud: Hans Zimmer’s score is comically overdone, even farcical. Every time something momentous is about to be said or done, Zimmer unleashes ear-drum pounding brass and Ragnorok synth. The music makes the movie seem either pretentious or a joke.

The new characters are interesting, but they’re equally pompous and hollow. Anne Hathaway has a great moment as Selina Kyle when the character first meets Bruce Wayne that is deliciously cool. After that, the character comes across as tacked-on. Nolan is too coy about her; is she villainess or anti-hero? Please, make up your mind, Mr. Director. Joseph Gordon-Levitt’s John Blake is a good character lost in the excesses of this movie. Tom Hardy’s Bane is scary, but his frightfulness is mitigated by this story’s murky intentions. Utterly underutilized are two supporting characters: Bruce Wayne’s business rival, John Daggett (Ben Mendelsohn), and his assistant, Stryver (Burn Gorman). The actors give this film’s best performances, and the characters are this movie’s dynamic duo. I was sad when they “left” the story.

All of The Dark Knight Rises’ characters, settings, sub-plots, and action don’t lead from point A to point B – beginning, middle, and end. They come together as one huge rambling wreck that eventually crashes, which we can call the end of the movie. The story is a good idea, but the screenplay is overkill. This is Christopher Nolan’s worst major film to date. If I did not know better, I would think that Joel Schumacher had directed The Dark Knight Rises, but this movie’s self-importance reminds me that this is a Chris Nolan flick.