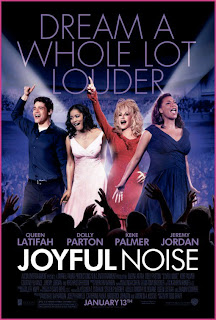 Joyful Noise is a 2012 music-driven film and Christian-theme drama from Todd Graff, the director of Bandslam. Joyful Noise stars Queen Latifah and Dolly Parton as rivals in a small church choir that is competing in a national singing competition.

The story is set in the small town of Pacashau, Georgia. Pacashau is going through some hard economic times, but the people take pride in Pacashau Sacred Divinity Choir. For quite a few years now, the choir has made it to the regional finals of Joyful Noise, a national amateur singing competition for church choirs.

Joyful Noise is strange in that writer/director Todd Graff seems to have fashioned not one movie, but several mini-movies put together to form one patchwork film narrative. At its heart, Joyful Noise is two things. The first is a teen romance featuring former childhood friends reunited in the throws of teen angst. Surprisingly, although Olivia is black and Randy is white, this is not an interracial love story. Their race/skin color never comes up as an obstacle in their relationship or as a problem for other characters. Joyful Noise’s second identity is that of a modern dustbowl drama about a rural, small town suffering the deprivations of what is essentially our modern version of the Great Depression, except that we call it the Great Recession.

The problem is that the love story and the town-in-recession story never come together; normally, one would affect the other, but they remain separate, and not quite equal. They’re like two different dramas sharing the same stage.

Meanwhile, there are these other dramas competing for space. There is the Vi Rose/G.G. cat fight that goes on too long, although the script doesn’t really provide enough to convince me that they should be mad at one another. There is the marital discord between Vi Rose and her husband, Marcus Hill (Jesse L. Martin), which is well written and perhaps should have been at the center of this movie. Instead, it seems like a tacked-on subplot. There is some kind of conflict between G.G. and Pastor Dale (Courtney B. Vance), and while Graff drops hints about it, he largely ignores it.

Of course, the movie is supposed to be about Pacashau Sacred Divinity Choir’s quest to get to the Joyful Noise nationals in L.A., but Graff often loses that behind all the other melodramas. Still, it is the music and singing that make this movie soar. At this point in the review, dear reader, you probably think that I didn’t like Joyful Noise. Quite the contrary: this movie is made of parts that don’t always fit, but I love it because the great music brings it all together and turns Joyful Noise into something that tugs at my heart.

Joyful Noise is Tyler Perry + Hallmark Channel holiday special + Glee. I love the Hallmark Channel’s Christmas movies, and Joyful Noise seems to put a gospel theatre spin on that. Although this is not a Christmas movie, it felt like Christmas-time to me, as I watched these characters come together to make things good for one another in really bad times. As for the acting, it’s mixed, although Queen Latifah has a screaming-fit scene with Keke Palmer that could pass as a pitch for an Oscar nomination. But Joyful Noise is about the noise and it is joyful. I want get that soundtrack.