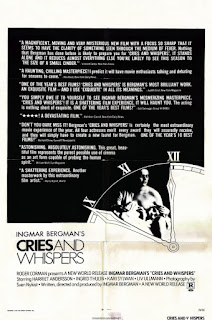 The subject of this movie review is Cries and Whispers (Viskningar och rop), a 1972 drama written and directed by legendary Swedish filmmaker, the late Ingmar Bergman (1918-2007). The film follows two sisters who watch over the deathbed of a third sister and all the complicated history between the three women. At the time, Cries and Whispers was only the fourth foreign-language film to be nominated in the “best picture” category at the Academy Awards.

Ingmar Bergman is one of the world’s most renowned film directors, and his 1972 film Cries and Whispers influenced much of filmmaker Woody (Annie Hall) Allen’s work. This is the first Bergman film that I’ve ever seen and, as the film’s tagline says, it, for me, was a haunting and shattering experience.

Two sister, Marie (Liv Ullman) and Karin (Ingrid Thulin), take care of their terminally ill sister, Agnes (Harriet Andersson), all under the watchful gaze of Agnes’s loyal servant Anna (Kari Sylwan), in Agnes’s Swedish manor, circa 1900. The sisters’ relationship, like the relationship of real people, is complicated, and Agnes’s looming death forces them to confront each other, as well as forcing Marie and Karin to relive painful moments with their husbands from the recent past.

Cries and Whispers starts off quiet slowly; in fact, it takes much patience on the part of the viewer to stick with this film. However, about a third of the way into the movie, you can catch its deliberately languid rhythm. Bergman gives every scene such astonishing individual attention that his film becomes a composition of pictorial frames. Each frame is like a separate painting that when viewed with the aid of light and speed becomes a complex and engrossing story. Director of Photography Sven Nykvist (who won an Oscar for his work here) washes the film in vivid, dark colors, especially red, so that the movie looks like one continuous oil painting.

Of the many things that I got from this film was Bergman’s fidelity to the visual purity of film. His dialogue, which is sparse, is efficient and rich in telling the story. However, so much of the film story is dependent upon what the viewer sees on the screen, be it in the facial expressions and gestures of the actors or the lavish and colorful settings. From actors, to props, to settings, each one creates a mood conveyed through sight that communicates to the viewer. Bergman, like the great painters, is telling a story with his canvas, and his entire painting doesn’t just contribute to the story, it is the story, from the frozen expression on a character’s face to the overwhelming crimson that covers the manor’s walls. It’s a visual feast that harkens back to silent films, before sound corrupted the purely visual sensations of cinema.

As much as Bergman’s prowess is on display in the story and composition of the film, the acting is superb, first rate, and award winning work. They’re all good, and each actor tells his or her part of the story, using the human body as an artistic tool. My favorite is Kari Sylwan as the maid Anna. She is the film’s moral center, the loyal servant who steadies Agnes in her suffering, her sickness being the catalyst for this tale. Hers is a quite and bravura performance, one of the best supporting roles that I’ve ever had the pleasure to watch.

Anyone who seriously loves cinema as an art and as a visual artistic experience has to see Bergman, and this, though not his most famous work, is a good example of what a film artist can do in the medium. I won’t provide spoilers of the story, but there are many scenes that could shatter the nerves and unsettle the viewer.