Review: The Best Thing about "Ted" is Ted 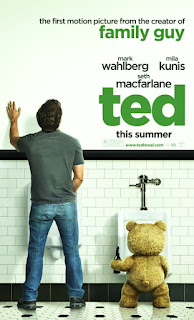 The subject of this movie review is Ted, a 2012 comedy and fantasy film directed by Seth McFarlane, the creator of the long-running animated television series, “Family Guy” (FOX). The film stars Mark Wahlberg, Mila Kunis, and McFarlane, who gives voice to a teddy bear created using motion-capture CGI.

Ted opens in 1985 in the city of Boston where we meet a lonely boy named John Bennett who receives a teddy bear for Christmas. John names the toy “Ted,” and makes a wish that Ted could come to life. John wakes up to find Ted walking and talking.

The story later moves to 2012 where we find an adult John Bennett (Mark Wahlberg) and Ted (voice of Seth McFarlane) still living together, watching bad movies and smoking pot. John has a dead-end job, but is dating a pretty, level-headed office worker named Lori Collins (Mila Kunis). After four years of dating, Lori wants John to grow up and leave childish things behind, and that includes Ted. But breaking up is hard to do and John and Lori’s relationship is put to the test, and Ted is endangered.

The best thing about Ted is Ted, and this trash-talking, vulgar teddy bear is a delightful gift that keeps on giving delights. Motion capture CGI (or animation or whatever) has given us one of the few motion capture characters with genuine personality since Gollum in the Lord of the Rings movies.

Wahlberg and Kunis are good, but the romance of John and Lori could not sustain an entire romantic comedy on its own. Wahlberg and Kunis’ characters are at their best when they form a threesome with Ted. Wahlberg has played the tough guy in so many crime and action thrillers that it is easy to forget how good he is at playing comedy with that solidly straight face of his. Kunis is expressive as an actress who trades understated for passion instead. She makes Lori’s frustration with John’s behavior and with her boss Rex’s harassment come through loud and clear.

Ted allows Seth McFarlane, as director, co-writer, co-producer, and co-star, to let loose in ways he cannot with “Family Guy,” and McFarlane and his cohorts get away with a lot on that network television series. In Ted, McFarlane and company tweak the sacred and the profane, as well as the mundane. It is also refreshing to see a mainstream comedy take on some good old-fashioned ethnic humor. Ted is not one of those comedies that fail to deliver. It’s very funny, and that’s enough.