"Batman: Under the Red Hood" is Very Red 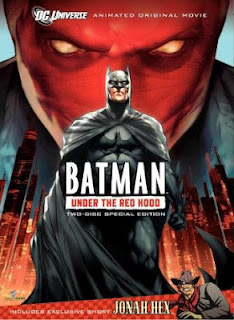 Batman: Under the Red Hood is a 2010 direct-to-video superhero animated film from Warner Bros. Animation. Starring DC Comics avenger of the night, Batman, this is also the eighth feature in the DC Universe Animated Original Movies line.

Batman with his original Robin by his side, now called Nightwing (Neil Patrick Harris), try to put a stop to Red Hood, but find him to be more than a match for both of them. Crime boss, Black Mask (Wade Williams) is determined to get rid of the Red Hood, even if it means making a most dangerous choice. For the villain whom Black Mask hires to assassinate Red Hood will set in motion a game of death.

Batman: Under the Red Hood is dark and edgy, first of all because it is one of the most violent (if not the most violent) of DC Universe Animated Original Movies. The film is also surprisingly morbid with its scenes that depict the death of a young person, multiple corpses, the theft of a corpse, exhumation, a funky resurrection scene, mass shootings, brutal beatings, etc. This is a dark, dark, Dark Knight indeed.

The Joker is practically a supporting character with relatively few scenes (although his presence hangs over the entire narrative). This version of the character is well written and also superbly voice acted by John Di Maggio, who gives the kind of turn that adds a rude and dark humor to The Joker’s edginess. Neil Patrick Harris is an odd touch as Nightwing, but his performance gives this film some needed warmth. Jensen Ackles, best known as “Dean Winchester” in the television series, “Supernatural,” brings some righteous rage and energy to this movie. That is the opposite of Bruce Greenwood as Batman, whose voice stands out only in a few scenes. Also, either Wade Williams is the reason that Black Mask is a joke or the character is simply inappropriately and unintentionally comical.

The animation is high quality, which shows in the action scenes. The art direction is good, but there have been better visualizations of Batman’s world, especially Gotham City, in other animated features. Still, Batman: Under the Red Hood is a good film, but there is something about it that keeps me from fully embracing it. Could it be the whole “death in the family” thing or the film’s emphasis on violence that is bothering me? Maybe.