"Justice League: Crisis on Two Earths" is Twice the Fun 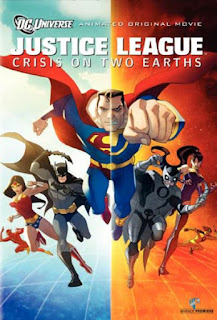 The film’s premise borrows from two DC Comics stories, “Crisis on Earth-Three” (Justice League of America #29-30, 1964) and the 2000 graphic novel, JLA: Earth 2, by Grant Morrison and Frank Quitely. Justice League: Crisis on Two Earths follows the Justice League as the team helps a good version of the arch-villain Lex Luthor from a parallel Earth where evil versions of the Justice League dominate the planet.

While rebuilding the Watchtower, their headquarters that orbits the Earth, the Justice League: Superman, Batman, Wonder Woman, Green Lantern, Martian Manhunter, and Flash are surprised to learn that supervillain Lex Luthor insists on having a meeting with the team. But wait! Isn’t Luthor in prison? This Lex Luthor (Chris Noth) hails from an alternate universe where evil counterparts of the Justice League rule over earth.

On Luthor’s Earth, Superman is Ultraman, Batman is Owlman, Wonder Woman is Superwoman, Green Lantern is Power Ring, and Flash is Johnny Quick. They form the Crime Syndicate. Now, the Justice League must help Luthor free his Earth from the Syndicate’s tyranny, but a certain Syndicate member is hoping to set a more diabolical plan in motion.

I thoroughly enjoyed watching Justice League: Crisis on Two Earths. Why do I like it? Of all the straight-to-DVD superhero films I’ve watched, this one offers the most bang for the buck that is my viewing pleasure in terms of fights. Superheroes and supervillains fight, and Crisis on Two Earths doesn’t deny the viewer, as we see every combination of battle possible. It seems as if every member of the Justice League gets a shot at every member of the Crime Syndicate and vice versa – from battles of entire squads to skirmishes of smaller groupings of characters.

This story is also surprisingly dark – from Owlman’s (James Woods) fanatical cynicism and narcissism to Batman’s (William Baldwin) cold-blooded and calculated decision making. The characters also make blunt assessments about each other, as Rose Wilson (Freddi Rogers) does of her father, President Slade Wilson (Bruce Davison). Also, the frank nature of the relationship between Owlman and Superwoman (Gina Torres) is not glossed over for the sake of younger viewers.

The voice-over performances by the voice cast bring to life the excellent character writing from television animation writer/producer, the late Dwayne McDuffie. The direction by Sam Liu and Lauren Montgomery is marvelous, especially in the framing of the action and fight scenes. Moi Animation Studio, the studio that produces the actual animation, does itself proud. This is a pretty movie that captures the color and energy of classic, four-color, superhero comic books. Justice League: Crisis on Two Earths – Encore! Encore!