"The Amazing Spider-Man" is Amazingly Human 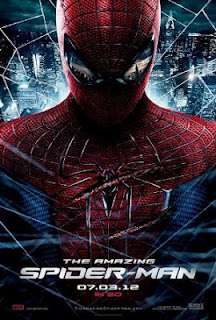 Teenager Peter Parker (Andrew Garfield) lives with his Aunt May (Sally Field) and Uncle Ben (Martin Sheen) and has since his parents, Richard (Campbell Scott) and Mary Parker (Embeth Davidtz) disappeared. Peter is an adolescent loner trying to find his place in life, and he has found a place in high school as the target of jock/bully, Flash Thompson (Chris Zylka). Peter does catch the attention of fellow student, Gwen Stacy (Emma Stone), a smart and rebellious girl.

Digging through his father’s papers, Peter learns the identity of one of Richard Parker’s old colleagues, fellow scientist Dr. Curt Connors (Rhys Ifans), who works at OsCorp (apparently a giant biotech firm). It is at OsCorp where Peter is bitten by a strange spider. The bite gives him strange powers and abilities similar to that of a spider, such as the ability to adhere to surfaces and to climb walls. After tragedy strikes, Peter decides to use his powers to fight criminals and help people, so he creates a mask and suit and names himself, “Spider-Man.” New York City does indeed need him, as there is a half-man/half-lizard monster known as “The Lizard” tearing the city apart.

When I heard that Columbia Pictures had hired Marc Webb to direct the Spider-Man movie reboot, I knew that by choosing the director of (500) Days of Summer the studio was going for something different from Sam Raimi’s three Spider-Man films. Webb certainly delivers something shockingly different. The Amazing Spider-Man clearly revisits plotlines from the first film, Spider-Man (2002), but everything about this new movie is from a different perspective.

The Amazing Spider-Man brings Peter Parker’s life into sharper focus. The screenplay, which is credited to James Vanderbilt, Steve Kloves, and Alvin Sargent (although I’m guessing that the majority of what is on screen is the work of Sargent and Kloves), emphasizes a character arc that follows Peter Parker’s journey to find himself. Peter searches for himself by trying to learn about his father. Actually, many of the film’s major characters are either trying to find themselves or find something that is missing in their lives.

All this searching makes The Amazing Spider-Man equally a character drama and a superhero movie – if not more the former than the latter. Make no mistake: there is plenty of superhero fantasy and action in this new movie, but it has such humanity because the story goes after the characters’ souls. The story is always digging at the characters, trying to get inside and discover what makes them tick. What do they want? What are they willing to do to get it? What are they afraid of? Webb gets to the heart of the character drama to the point that character is every bit as engaging, enthralling, and exciting as when Parker puts on the suit and swings over New York City or has a throw-down fight with The Lizard.

There are a number of good performances in The Amazing Spider-Man, but Andrew Garfield stands out, of course. He is magnificent as Peter Parker/Spider-Man. Unlike Tobey Maguire’s lovable, sad sack, and put-upon Peter Parker, Garfield’s Parker is a man of masks. He plays the sullen geek while in school, but at home and at work, he has a witty personality. He is also stubborn and strong-willed. Garfield makes it all believable, and he has fashioned his own Peter Parker, independent of Maguire’s Parker, which is also a fine version of Parker/Spider-Man.

As you can tell, the practically life-long Spider-Man fan in me loves The Amazing Spider-Man. Everyone involved took something familiar and created a film that seems like a revelation.