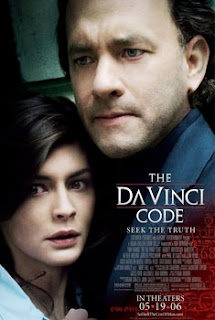 The subject of this movie review is The Da Vinci Code, a 2006 American mystery thriller from director Ron Howard and starring Tom Hanks. The film is based upon Dan Brown’s 2003 novel, The Da Vinci Code, which was a worldwide bestseller.

The French police summon famed Harvard Professor of Religious Symbology, Robert Langdon (Tom Hanks), to the world renown Paris museum, the Louvre, to assist them in a murder investigation in which the victim, curator of the Louvre, Jacques Sauniere (Jean-Pierre Marielle), has left behind a bloody trail of symbols and clues, including a bloody pentacle Sauniere drew on his own body before he died. However, police cryptologist, Sophie Neveu (Audrey Tautou), also arrives at the crime scene and surreptitiously informs Langdon that the lead investigator, Captain Fauche (Jean Reno), has pegged him as the first and only suspect in the murder.

Together, Langdon and Neveu unveil a series of stunning secrets hidden in the works of Renaissance painter Leonardo Da Vinci housed at the museum, all of which lead to a legendary secret society that has been guarding a secret nearly 2000 years old. Barely escaping the museum with the police hot on the tracks, Langdon and Neveu race from Paris to the French countryside to London, collecting clues as they attempt to crack Da Vinci’s code and reveal a conspiracy that may shake the very foundations of mankind. There, are however, sinister forces determined to stop them – personified in the form of a murderous albino monk, Silas (Paul Bettany).

Ron Howard’s latest film, The Da Vinci Code, is adapted by screenwriter Akiva Goldsman from author Dan Brown’s insanely popular novel of the same name. In fact, at 60 million copies sold worldwide, Brown’s book is the biggest selling hardcover work of fiction in history, and it has courted controversy because of its mix of conspiracy theory and pseudo history about the origins of Christianity virtually since the day it was published. Howard’s adaptation opened the 2006 Cannes Film Festival, where many of those who saw it allegedly panned the movie. By the time it opened theatrically worldwide on May 19th, U.S. film critics were either damning the movie with faint praise or simply skewering it.

Some critics have said that Tom Hanks and Audrey Tautou have no screen chemistry, but their characters certainly connect the first time they meet one another in the narrative. Some said that Hanks was miscast as novelist Dan Brown’s cerebral version of Indiana Jones, Robert Langdon, and Hanks is certainly older than the Langdon in Brown’s books (Langdon is also the star of Brown’s Angels and Demons) who is 30-something. However, Hanks is one of the most popular actors of his generation and of the last two decades, not to mention that he is a stellar movie actor. Regardless of the roles he takes, audiences take to Hanks and willingly live vicariously through his characters – seeing the movie through his eyes. He could sell salvation to the devil. So if he’s not like the Langdon of the book, it hardly seems to matter in the context of the movie.

Some critics have said that Howard’s direction is slow and makes The Da Vinci Code clunky. The film is riveting from beginning to end, and Howard, who has a Spielberg-like penchant forgetting audiences to respond favorably to the emotional cues he sets for different points in his films, takes us on an thrill ride that is equal parts intellect-engaging mystery tale and pulse-pounding, action/adventure flick. Some critics have also said that Howard’s film buries us in exposition. Much of the novel amounts to page after page of endless (but interesting) discussion of philosophy, religious history, art history, Middle Ages history, symbols, codes, Catholicism, etc. Goldsman screenplay only retains the exposition that is necessary for the turning the central plot of Dan Brown’s book into a film. Howard takes much of the novel’s historical discussion and turns it into flashbacks for the movie, so (for instance) we see snippets of The Knights Templars’ history rather than just be told about it.

The Da Vinci Code is simply a grand adult thriller that more than retains the spirit of Brown’s both controversial and internationally beloved book. The filmmaking on the part of writer and director is superb. The art direction and set decoration is top notch, all of it filmed in a cool and comforting photography that creates a sense of great mystery – an atmosphere that recalls Raiders of the Lost Ark. The acting is just right, with the performers knowing how to play up or down the fantastical and preposterous notions from Brown’s books – how to make their characters make the outlandish seem worth the effort to unravel it. The best at that is Ian McKellen as the jovial, bon vivant of alternative and wacky history, Sir Leigh Teabing. It all makes The Da Vinci Code one of the truly exceptional film mysteries to come along in many a year.