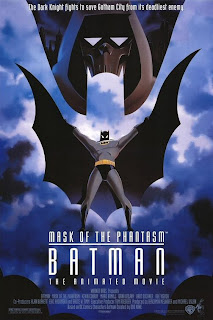 ANIMATION/SUPERHERO/ACTION/MYSTERY with elements of drama

Batman: Mask of the Phantasm is a 1993 animated superhero feature film. It is a spin-off from the Batman: The Animated Series, the Emmy Award-winning television series that ran from 1992 to 1995.

There is a new killer in Gotham City, a costumed murder dubbed The Phantasm (Stacy Keach, Jr.) who murders a group of crime bosses. Because of the killer’s dark appearance, he is mistaken for Batman (Kevin Conroy). An ambitious city councilman, Arthur Reeves (Hart Bochner), sends the Gotham police force after Batman. Implicated in the murders, the Dark Knight must solve the mystery of The Phantasm’s identity.

However, a complication arrives in the life of Batman’s civilian identity, Bruce Wayne (Conroy), when a former fiancée, Andrea “Andi” Beaumont (Dana Delany), comes back to Gotham. How she is connected to The Phantasm’s killing spree and how Bruce Wayne’s past figures into the case are just a few questions Batman must answer… and the Joker’s (Mark Hamill) in town gumming up the state of affairs.

Batman: Mask of the Phantasm is the best Batman feature film to date, and it’s probably the least seen movie version of the venerable comic book character because the film is animated. Truthfully, animation is usually the best medium with which to adapt a comic book. Animation lends itself to the exaggeration and color fantasy settings in which comic book characters and worlds work best.

Based upon the popular animated television series, “Batman” – best known as Batman: The Animated Series” – which began in 1992, Mask of the Phantasm has all the creative talents who made the TV series so popular (and honored) behind it. In fact, the film was originally planned to be a direct-to-video release. Thus, it lacks the punch of a theatrical film, as the filmmaker’s didn’t have enough time to rework it and throw in the pyrotechnics movie audiences expect of theatrical films. However, Mask of the Phantasm is highly entertaining, and its dark and moody atmosphere is more genuine than any other Batman theatrical release. The drama is moving, and the mystery is palatable, absorbing, and suspenseful, certainly more so than that of the other Batman live action films. While appropriated for most children six and above, the film’s storytelling is mature enough (without being vulgar) to intrigue older viewers.

The quality of the animation wasn’t close to that of the best theatrical releases from Disney (or the many animated films directed by Don Bluth from the late 80’s to mid 90’s), but it was some of the best animation on TV for its time. The program’s color palette and art deco design made it a favorite among both animation and comic book professionals and fans. All of that carries over to the film, so Batman: Mask of the Phantasm is as good as the animated TV series. Since the film is longer, that makes it a special treat.