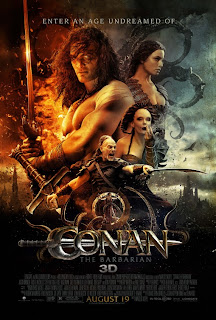 Conan the Barbarian is a fictional character created by Robert E. Howard. Conan first appeared in publication in the December 1932 issue of Weird Tales in the short story, “The Phoenix on the Sword.” Howard featured Conan in several short stories, but only one novel. After Howard’s death, other authors would write Conan novels, and the character has also appeared in comic books nearly non-stop since 1970.

The character is best known, outside of people who read fantasy fiction and comic books, for his appearance in two films from the early 1980s. Arnold Schwarzenegger portrayed Conan in Conan the Barbarian (1982) and Conan the Destroyer (1984). After over two decades, Conan returned to movie screens in Conan the Barbarian, a 2011 action/fantasy film and sword and sorcery movie. In the new film, Conan seeks revenge against the ambitious and ruthless warlord who killed his father.

After his father, Corin (Ron Perlman), is killed and his entire village murdered, young Conan (Leo Howard) swears revenge. The killer is an empire-building warlord, Khalar Zym (Stephen Lang), who wants to reassemble the Mask of Acheron, an ancient relic that will give him the power to conquer the world. The story picks up 20 years later and finds Conan (Jason Momoa) a pirate living amongst the Zamoran pirates led by Artus (Nonso Anozie).

Fate brings Conan into contact with one of the men who raided his village. From this man, Conan learns that Zym and his sorceress daughter, Marique (Rose McGowan), are searching for a pureblood descendant of the necromancers that made the Mask of Archeron. They find that descendant in the form of Tamara Amaliat Jorui Karushan (Rachel Nichols), a young woman living in a monastery, but Conan gets Tamara first. This begins a battle between Conan and Zym that will decide the fate of the world.

There are so many fantasy films in theatres that are aimed at the family audience or, at least, general audiences, including females. Conan the Barbarian is aimed squarely at males, but mainly at males whose balls dropped more than a few years ago. Speaking of balls: Conan the Barbarian is balls to the wall in terms of the sheer lunacy thrown on the screen. This movie is hardcore – even more so than the darker Conan the Barbarian and certainly more than its lighter, PG-rated sequel, Conan the Destroyer. Hacking, slashing, a bloody caesarean, beheadings, torture, topless wenches, mass murder, and assorted depictions of gore and brutal murder: this is the real Conan, steeped in the violent and edgy material of weird pulp fiction.

Visually, Conan the Barbarian looks like a Robert E. Howard Conan story should look. There are swarthy pirates, hefty warriors, comely maidens and wenches, reptilian witches, and miscreants of all sizes and shapes. Barbarian villages dot the landscape; ruined fortresses protrude from rocky outcroppings; a monastery hides beyond a cavernous pass; immense castles and structures reach for the sky; and deceptively fast ships cut across the sea.

Conan the Barbarian does have its problems. The movie is a little too long, and, without spoiling, I can say that some of the places the story sends Conan don’t seem to make much sense. It is as if the film is simply being stretched or the story padded. Some of the action scenes work very well, but others are simply extraneous or gratuitous.

The characters are bit shallow, but the actors make the most of them. I would describe the performances as grand and flamboyant rather than over the top. Rose McGowan is a hoot as the conniving, vicious Marique. Stephen Lang brings to this movie the same aggressive physicality he brought to Avatar as the villain, Colonel Miles Quaritch. It is difficult for me to separate Arnold Schwarzenegger from Conan, but I like Jason Momoa’s take on the character. Momoa’s Conan is younger, leaner, and meaner; he is like a wolverine and a panther.