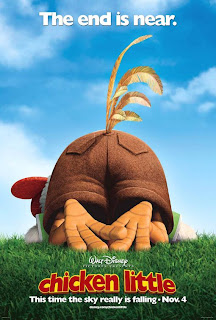 One day a piece of the sky falls to earth and hits Chicken Little (Zach Braff) on the head. The sky is falling her warns, but the townsfolk of Oakey Oaks, including his father, Buck Cluck (Garry Marshall), conclude that an acorn hit the boy chick on the head. The incident swiftly turns Chicken Little into the town joke and embarrasses his father. However, the plucky chicken joins the local baseball team with the hopes of reviving his reputation and earning his father’s respect. Chicken Little does indeed lead the team to an upset victory, and he and his pops are on good terms again.

All is well, but another “piece of the sky” hits Chicken Little on the head. Still, he’s reluctant to cause another scene and once again be labeled crazy. Instead, he enlists the help of his friends: Abby Mallard (Joan Cusack), who is also known as the Ugly Duckling because she is so… unpretty; Runt of the Litter (Steve Zahn), a tall, obese pig; and Fish Out of Water (“voice” created by film editor Dan Molina), a fish who wears a water-filled helmet, and the gang embark on an adventure to stop an alien invasion without sending the town into another panic.

The script is Chicken Little’s big problem. The animation is fine, sometimes even outstanding. There are a few moments when it has the quality of the first Shrek, but there are also times when it has the texture and quality of Disney/Pixar’s The Incredibles. However, the film is basically pretty pictures over an ugly story. The script bludgeons the audience with the notion that at this movie’s heart (which it doesn’t have) is the story of a father and son coming together. The father, in this case, Buck Cluck, must learn to accept his son’s physical shortcomings and love him for the plucky fella he is. But unlike Finding Nemo, where the parent/child dynamic seemed so natural, Chicken Little takes that relationship and drapes a cheesy action movie cartoon for children over it.

Chicken Little looks, feels, and sounds like the kind of action movies that have been so popular over the last decade, but tamed for children. Anyone who has seen Independence Day will recognize it in this flick. Chicken Little’s setting, Oakey Oaks, is the same old idealized Midwestern small town that Hollywood has been shoving at audiences for decades. That place is a fairy tale really, but it’s a good setting for War of the Worlds, which is another source reference for this flick. Chicken Little is as noisy and/or as busy as The Rock, Armageddon, Bad Boys II, etc. This is director Mark Dindal’s (The Emperor’s New Groove) Steven Spielberg/Michael Bay movie.

Chicken Little, as voiced by Zach Braff, is actually an endearing character – this movie’s saving grace, in fact. The character itself is a cutey, sort of a riff on “Egghead, Jr.” from those “Foghorn Leghorn” Looney Tunes cartoons. He’s a plucky little fella and the animators lovingly rendered and animated him.

The rest of the cast is mostly trash. The characters aren’t really characters so much as they are stereotypes that get to do stand up routines at different times in the film narrative. I immensely disliked Abby Mallard – nothing more to say about it here – and Runt of the Litter is pathetic. Steve Zahn can play quirky characters whose humor comes through even in crime dramas (Out of Sight), but his comedic gifts are lost because we don’t him here; all we get is his voice in the annoying Runt. Fish Out of Water provides nice slapstick, but the jokes come across as desperation on the writers’ parts. Garry Marshall’s Brooklyn accent is out of place in this film, and as a father, Buck Cluck is like an overbearing mother in his demands on his son, Chicken Little.

I guess the shortest and perhaps best way to describe Disney’s Chicken Little is as Jimmy Neutron: Boy Genius with much better computer animation.