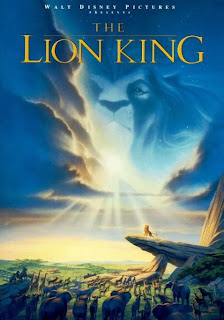 ANIMATION/FANTASY/DRAMA/FAMILY with elements of adventure and comedy

The Lion King is a 1994 Oscar-winning, animated film from Walt Disney Pictures. It is the story of a young lion who must take the place of his late father, the king, and save his land from his scheming uncle, his father’s brother. If The Little Mermaid (1989) was the beginning of the “Disney Renaissance,” then, The Lion King was the apex of Disney’s hand-drawn animated films during that renaissance.

The Lion King is set in Africa. King Mufasa (James Earl Jones) rules over the Pride Lands from Pride Rock. As the story begins, Queen Sarabi (Madge Sinclair) has just given birth to a cub, Simba, who will one day be king. Simba (Jonathan Taylor Thomas) is a playful and willful cub, but Mufasa guides and prepares him for the day when he will rule. Meanwhile, Mufasa’s brother, Scar (Jeremy Irons), lurks in the shadows, bitter that he is not king, and he plots with the hyenas to murder Mufasa. After tragedy strikes, Simba leaves the Pride Lands, intending never to return.

Years later, an adult Simba (Matthew Broderick) lives in exile. His constant companions are a meerkat, Timon (Nathan Lane), and a warthog, Pumbaa (Ernie Sabella). However, Simba’s past returns in the form of an old friend looking for food. It is then that Simba is forced to make important decisions about both his future and that of the Pride Lands.

The Lion King was Walt Disney Animation Studios 32nd full-length animated feature film. Some of Disney’s hand-drawn animated (or 2D animated) films produced in the last four decades are exceptional, even superb. None are as good as The Lion King. One could argue that The Lion King embodied everything up to that time that was great about Disney animated films. The Lion King is an engrossing animal fable or Disney anthropomorphic story like Bambi. It has a superb musical score and the kind of songs that are soaring, inspirational, heartfelt, toe-tapping, and/or romantic, in the tradition of The Little Mermaid, Beauty and the Beast, and Aladdin. Its animation brings together the “art of Disney” animation, which is the illusion of life, and also the early introduction of computer animation – from the coloring to the computer generated wildebeest stampede.

The story, which borrows from Shakespeare’s Hamlet and the Holy Bible, is a universal story of a young hero’s journey from carefree childhood and youthful tragedy to reluctant man-child and adult responsibility. The obstacles that Simba faces, his conflicts and struggles, and his confusion all feel honest and true – not contrived and overly sentimental. The audience can buy into Simba because so much about his him seems genuine.

Each Disney animated film always has good voice performances and at least one great performance. The Lion King has more than a few great voice performances. James Earl Jones is regal personified as King Mufasa, while Jeremy Iron is his evil, velvety opposite. Whoopi Goldberg, Cheech Marin, and Jim Cummings are superb as the hyena trio. However, Nathan Lane and Ernie Sabella are scene-stealing showstoppers as Timon and Pumbaa, respectively, by creating signature, unforgettable Disney characters.

The classic Disney animated films always get me, and The Lion King charms me now just as it charmed me 17 years ago. This superbly animated feature is simply magic.