Everyone Kills It in "Horrible Bosses" 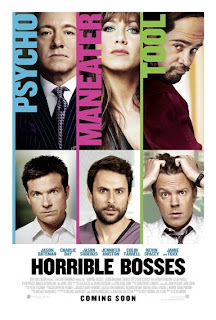 Horrible Bosses is a 2011 crime comedy and is the story of three friends who plot to murder the three horrible bosses that make their lives hell. A black comedy because it deals with dark subject matter in an entirely humorous context, Horrible Bosses is one of the year’s funniest movies. As soon as I finished watching it, I wanted to watch it again.

For months, Nick Hendricks (Jason Bateman) practically worked day and night at his job in order to appease his boss, Dave Harken (Kevin Spacey), for a promotion Harken never intended on giving Nick. Harken is a “total fucking asshole.” Dale Arbus (Charlie Day) is a dental assistant who is constantly being grossly sexually harassed by his boss, dentist Dr. Julia Harris (Jennifer Anniston). Harris is an “evil crazy bitch.” An accountant at Pellitt Chemicals, Kurt Buckman (Jason Sudeikis) loves his boss, Jack Pellitt (Donald Sutherland). Then, Jack is replaced by his son, Bobby Pellitt (Colin Farrell), who wants to drain the company of cash that he can spend of hookers and drugs. Bobby is the “dipshit cokehead son.”

One night, over drinks, the three decide to kill their bosses. In search of a hit man, the trio meets Dean “Motherfucker” Jones (Jamie Foxx), who suggests that Nick, Dale, and Kurt kill each other’s bosses to hide their motives while making the deaths look like accidents. The friends discover, however, that killing is harder than they thought. Then, they get unexpected help.

Six years passed between when Horrible Bosses began development and when it finally became a movie. A lot of actors were considered for the various roles, but the filmmakers should consider themselves lucky that things worked out the way they did. The actors who got the roles came together to form a cast that is magic. This gleefully wicked comedy is the result of heaven sent screen chemistry. Everyone is strong, but if I had to choose a standout, it would be Charlie Day as Dale Arbus. Day is a scene stealer and Dale Arbus is a lovable good guy who is funny when he is flustered. Day’s performance turns every scene in which Dale appears – even the most depraved ones – into a comedy gold. Day gives Dale a madness that sparks this film to the next level, so that Horrible Bosses is not just raunchy or just another slob comedy. It is glorious black comedy that stands with the best of them.

Director Seth Gordon gets credit for keeping the actors’ improvisation from going rogue and ruining the film’s pace. Gordon (Four Christmases) is quickly proving himself to be a master of raucous, cheerfully irreverent, non-politically correct comedies. And Horrible Bosses is a masterpiece of incorrectness.