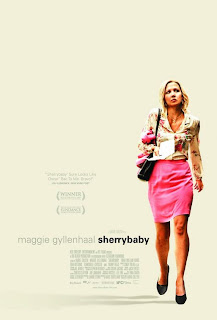 After serving three years of a five-year prison stint, Sherry Swanson (Maggie Gyllenhaal) is out on parole and dealing with the realities of both her old life and her new life. She has to face her hard-nosed parole officer, Hernandez (Giancarlo Esposito), find a job, and deal with the heroin addiction that led her to prison. She has also has to renew her relationship as mother to her five-year old daughter, Alexis Parks (Ryan Simpkins). In her absence, however, Sherry’s brother Bobby Swanson (Brad William Henke) and his wife Lynette (Bridget Barkan) have become surrogate parents to Alexis, and they aren’t anxious to give her back to Sherry, whom they consider to still be troubled. Another complication is her questionable relationship with her father, Bob Swanson, Sr. (Sam Bottoms), but she does find some companionship in a fellow addict, Dean Walker (Danny Trejo).

Writer/director Laurie Collyer’s small, sharp indie drama, SherryBaby showcases the best performance Maggie Gyllenhaal has given to date. Gyllenhaal builds her performances on nuance, and she creates a genuine young woman struggling with addiction, regret, and the longing to recover the one thing she considers to really be hers – the daughter she had to abandon to her brother. For her performance as a young woman who is an emotional wreck, Gyllenhaal received a 2007 Golden Globe nomination for “Best Actress in a Motion Picture – Drama.”

Gyllenhaal is not alone in her excellent work. Collyer brings out fine work in everyone, including a moving and authentic performance from Brad William Henke as Sherry’s brother Bobby, who is struggling to balance the needs of the trio of women in his life: Sherry, his wife Lynette, and Alexis. Henke shines in two scenes – one in which Bobby surreptitiously watches his father Bob, Sr. (played by Sam Bottoms, pitch perfect in a small, but crucial role) and Sherry, and the second in which Bobby has lunch with Sherry as he tries to convince her of how much he cares about her. Henke quietly, but intensely reveals the depth of Bobby’s love for his sister, and also the difficult situations he must navigate in his extended family as a result of his unqualified love and support of Sherry.

The trio of Collyer, Gyllenhaal, and Henke and the rest of the cast and crew have created one of those indie films that looks small, but also looks like a large flashy gem when viewed in the best light.

NOTES:
2007 Golden Globes: 1 nomination: “Best Performance by an Actress in a Motion Picture – Drama” (Maggie Gyllenhaal)
Posted by Leroy Douresseaux at 11:29 AM