"The Muppet Movie" Still Moves Me 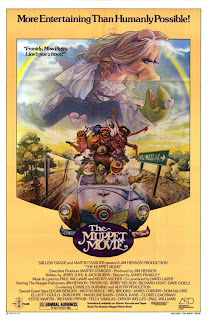 The Muppet Movie is a 1979 live-action, comic fantasy film and musical. This Oscar-nominated film stars The Muppets, the puppet characters created by the late Jim Henson, specifically the characters that appeared on the television series, “The Muppets” (1976-81). A film-within-in-a-film, The Muppet Movie tells the story of how The Muppets came together, or, as Kermit the Frog says, “It’s sort of approximately how it happened.”

The film begins with Kermit the Frog (Jim Henson) relaxing in a Florida swamp on a sunny afternoon, when a Hollywood agent tells him that he should pursue a career in Hollywood. Inspired by the idea of “making millions of people happy,” Kermit begins a cross-country journey, at first by bicycle. After an accident, Kermit teams up with Fozzie Bear (Frank Oz) and resumes the trip in Fozzie’s Studebaker. Along the way, they pick up fellow travelers like The Great Gonzo (Dave Goelz) and his mate, Camilla the Chicken (Jerry Nelson), and of course, Miss Piggy (Frank Oz).

Meanwhile, the villainous Doc Hopper (Charles Durning) and his assistant, Max (Austin Pendleton), pursue them. The Colonel Sanders-like Hopper is the owner of a “French-fried frog legs” fast food franchise, and he wants Kermit to be the new spokesman for the franchise. After Kermit says no, Hopper chases him, making offers that become increasingly threatening.

Prior to this recent viewing, I had not seen The Muppet Movie since the early 1980s (I think), but I remember liking it. I wasn’t sure how I’d feel about it now, but it turns out that I still love the movie. Is the reason nostalgia? No, The Muppet Movie is simply an excellent film. As a film musical, it has terrific songs from Paul Williams and Kenny Ascher, and three of them (“Rainbow Connection,” “Movin’ Right Along,” and “Can You Picture That?”) are great.

As a comedy, it is sharp and smart, surprisingly so for a film that is aimed at children, although “The Muppet Show,” was meant to appeal to both children and adults. There is sly innuendo, clever word play, and snappy dialogue. The film even offers satire, such as its skewering of the desire to be famous for entertaining.

And hell, ya’ll, it’s the Muppets. What could be unlikable about them? I look forward to my next viewing of The Muppet Movie, and I want to encourage you, dear readers, to see it if you haven’t already or to just see it again.