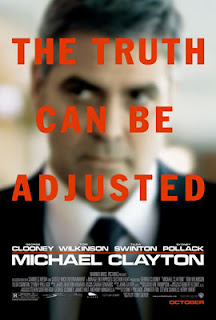 In screenwriter Tony Gilroy’s Michael Clayton, his debut as a film director, a burned out corporate lawyer who has built a career on cleaning up his clients’ messes faces his biggest mess when a guilt-ridden colleague threatens the settlement of a multi-million-dollar case. Gilroy is best known for writing the three Jason Bourne films, including most recently, The Bourne Ultimatum.

Michael Clayton (George Clooney) is an in-house “fixer” or “bagman” at Kenner, Bach & Ledeen, one of the largest corporate law firms in New York. A former criminal prosecutor, Clayton is burned out and hardly content with his job as a fixer, but his divorce, a failed business venture, and mounting debt have left Clayton inextricably tied to the firm. The firm is defending U/North (United Northfield) a giant corporation in a multimillion dollar class action lawsuit, but Kenner, Bach & Ledeen’s brilliant litigator, Arthur Edens (Tom Wilkinson), has a meltdown that threatens to upend a potential settlement entirely in favor of the plaintiffs against U/North.

Clayton faces the biggest challenge of his career and life to reign in Edens. Meanwhile, U/North’s general counsel, Karen Crowder (Tilda Swinton), who operates on a hair-trigger, knows that her career rests on the multi-million dollar settlement that once seemed to be heading to a successful conclusion for U/North. Edens’ rogue status means that Crowder may have to take matters into her own ruthless hands.

At one point in Michael Clayton, Sydney Pollack’s Marty Bach says, “People are fucking incomprehensible,” and that seems to be one of the dominant themes of Gilroy’s absolutely gripping legal thriller. Sure, Michael Clayton is an exposé of what evil corporations can do (poison their customers) and the way corporate law firms help them get away with it. The greed, the lies, and the under-the-table murder-for-hire deals are in evidence here, and while we’ve seen this in other muckraking dramas, what sets Michael Clayton apart is that we’re watching a film about people and not just characters.

It is in these people we see both the beauty and ugliness of humanity. We can admire how George Clooney’s Michael Clayton chases his ideals even if no one else believes in them or even if those ideals are the antithesis of others’ beliefs. The manner in which Gilroy tackles such mature themes through his star Clooney makes this an accomplished movie for adults. It’s a crackling delight full of standout performances including Tom Wilkinson’s Oscar-nominated turn as Arthur Edens and Tilda Swinton’s Oscar-winning performance as the neurotic viper Karen Crowder.

And Clooney: what can I say? He’s a movie star in the Old Hollywood tradition and also an exceptional actor that modern American filmmaking would be lost without.