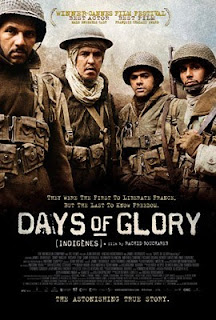 Indigènes or Days of Glory (as the film is known by its English title) earned a 2007 Oscar nomination for “Best Foreign Language Film” as a representative of Algeria. Indigènes recreates a chapter largely erased from the pages of history and pays overdue tribute to the heroism of a particular group of forgotten soldiers who fought and died during World War II. Days of Glory chronicles the journey of four North African soldiers who join the French army to help liberate France from Nazi occupation during World War II.

Saïd Otmari (Jamel Debbouze), Yassir (Samy Naceri), Messaoud Souni (Roschdy Zem), and Abdelkader (Roschdy Zem) leave their country, Algeria, a French colony, to fight for France, which they call the “Motherland.” They chafe under the command of the Sergeant Roger Martinez (Bernard Blancan), a French Algerian. The men fight passionately for France, although they’ve never been to the country. Still, despite the North Africans’ bravery and loyalty as they travel fight from Italy to France, they face daily humiliation, inequality, and naked bigotry from the French. The four men eventually find themselves alone in a small French village defending it from a German battalion. This pedagogical or educational film is also a reminder that the controversies of French World War II history remain today, especially as the French government has denied the surviving North African soldiers their pensions.

Days of Glory is a good, but not great, historical film. Its strength is in the chronicling of the prejudice and bigotry these non-white or non-European soldiers faced while sacrificing their lives, limbs, and peace of mind for France, a country that many still believe largely did not fight for itself against the Nazis. For war movie buffs, the best combat sequence takes place in the movie’s closing act.