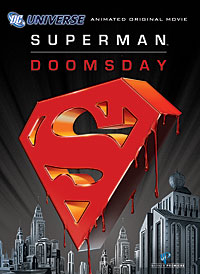 Superman: Doomsday is a 2007 direct-to-video animated superhero film. It is based on “The Death of Superman,” a 1992 storyline that ran through DC Comics’ various Superman comic books, which culminated in the death of Superman in Superman (Vol. 2) #75. Superman: Doomsday is the first release in the DC Universe Animated Original Movies from Warner Premiere and Warner Bros. Animation.

Lex Luthor’s (James Marsters) company, LexCorp, unleashes a powerful alien monster known as “Doomsday,” from his burial place deep in the earth. Doomsday then goes on a murderous and destructive rampage. It’s up to Superman (Adam Baldwin) to defend the Earth, but at the apparent cost of his life.

Later, after his burial, Superman appears to have risen from the dead. Lois Lane (Anne Heche), his secret lover, is suspicious. With the reluctant assistance of fellow Daily Planet reporter, Jimmy Olsen (Adam Wylie), Lois seeks the truth and discovers that Lex Luthor is behind this risen Superman, who certainly doesn’t seem like his old self.

Bruce Timm is known as one of the minds behind the popular animated TV program, “Batman: The Animated Series.” He wears many hats in the production of this straight to video film, Superman: Doomsday, although the look of the animation in this film is different from Timm’s earlier work. In fact, the character design is streamlined with crisp line work, and the art direction emphasizes rich, dark colors. Technically, the animation is quite good (although the movement of the characters is often a bit awkward and stiff), which is essential in a film with so many extended, elaborate fight sequences and scenes of destruction and explosions that rival big-budget Hollywood sci-fi and action movies.

The problem is the story and voice acting. Not only is the narrative’s mood very dark, but the film is often violent, shockingly so, as Doomsday often kills humans – sometimes ever so slightly off screen. That’s not really a problem, except for very young viewers. The problem is the leaden pacing and flat mood in what should otherwise be an exciting and riveting movie. Superman’s death and resurrection just doesn’t have the emotional impact they should have.

Superman: Doomsday is a picture show of pretty and quality animation. It just doesn’t live up to its potential as an epic story.