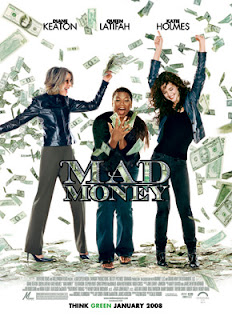 While watching the crime caper Mad Money, anyone who views it with a critical eye will notice that the character writing is thin and that the plot stumbles whenever the narrative jumps back and forth in time, but director Callie Khouri (who won an Oscar for writing Thelma & Louise) keeps things moving – fast and upbeat – so the viewer won’t see the cracks in this lighthearted crime escapade.

The plot is implausible, and even viewers that don’t look hard can see where the criminal conspiracy at the heart of Mad Money would fall apart early in its execution. However, this comic trio of Diane Keaton, Queen Latifah and Katie Holmes are so lovable, and this recessionary crime tale about the struggling working class and downsized middle class is both timely and rings true.

Bridget Cardigan (Diane Keaton) discovers that she is about to lose both her home and comfortable middle class lifestyle because her husband, Don (Ted Danson), has been unemployed for a year (downsized from his job), and the couple is nearly 300,000 dollars in debt. Bridget, a stay-at-home mom, has been out of the job market for decades, and her decades-old comparative literature degree won’t help her in this tight job market. She accepts the only job she can get – as a janitor. Her custodial job is at the Federal Reserve Bank, where every day, employees destroy millions of dollars in worn out paper currency taken out of the system.

Bridget surprisingly learns that she has more in common with her new co-workers than she thought when she forges an unexpected bond with Nina Brewster (Queen Latifah), a hard-working single mother of two young boys, and Jackie Truman (Katie Holmes), a wacky and exuberant free spirit who acts as if she has nothing to lose. Looking to finally just get ahead, Nina and Jackie find themselves buying into Bridget’s scheme - steal all those 1, 5, 10, 20, etc. dollar bills meant for destruction. As their little crime syndicate amasses piles of cash, the girls think they have pulled off the perfect crime – that is until one misstep has them trying to stay one step ahead of the law.

Playing Bridget Cardigan, who must go from supportive wife to bread winner, Diane Keaton doesn’t simply play the character as merely a supportive housewife. Early in the film, Bridget is mostly boosting her husband’s confidence, but Bridget soon has to roar – to assert herself. That’s when Keaton deftly transforms her character into a bossy spitfire, a snappy malcontent not content to watch the comfortable world for which she worked so hard to attain just vanish because society considers her and Don passé. Keaton makes Bridget both sweet and sour and both fragrant and pungent. She’s a senior citizen with zest, spicy and spunky, and Keaton shows that in many scenes, especially when we get to watch Bridget go to Nina Brewster’s inner city hood, in spite of her fears.

As for the supporting characters, Queen Latifah’s Nina Brewster is by far the best of the lot. Latifah makes Nina the island of sanity in a sea full of screwballs – including Keaton’s Bridget, but Latifah also makes the sometimes dour, so-serious Nina so quite likeable. Holmes is no slouch either. Her winning Jackie Truman, always bouncing and shaking to the music of her mp3 player, is the fun chick everyone wants to know. Holmes lights up the screen with Jackie’s screwy bubbly personality.

This is one time in Hollywood fare that a movie’s plot leaves male characters as background filler material, and the girls become the action heroes. Mad Money is, however, more than just a chick flick. It does the caper film as light, but both entertaining and well-timed material, and in these times with so many worried about their finances and livelihoods, it’s darn good to watch these girls beat the system silly. All hail this queenly trio for making stealing money as sweet as honey.