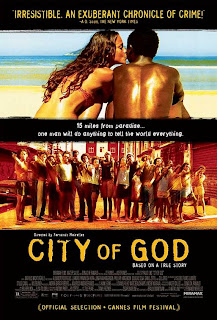 CRIME with elements of drama and thriller

At the 2003 Cannes Film Festival, Miramax picked up the American distribution rights to Brazilian filmmaker Fernando Meirelles’ blistering 2002 film Cidade de Deus. The film went on to earn four Academy Award nominations, including one for Meirelles’ direction although the Academy decided that his co-director Kátia Lund had not contributed anything substantial to the filmmaking narrative and did not also recognize her with a nomination.

Released under the English title City of God, the film covers a period of roughly 15 years from the late 1960 to the early 1980’s in the Cidade de Deus housing projects in Rio de Janeiro. A boy named Rocket (Luis Otávio) watches as his older brother and other neighborhood youths get involved in crime, especially the drug trade. Before long many of them, including Rocket’s brother are dead. Years later, an older Rocket (Alexandre Rodrigues) is struggling to become a news photographer, while an old associate, Li’l Ze (Leandro Firmino da Hora), rules the drug trade in most of Cidade de Deus, but he’s running up against an old rival, which leads to a long and bloody street war.

Brutal and unflinching, City of God may draw comparisons to Pulp Fiction, but the former is shot in a raw documentary style that mixes music video style editing and long contemplative shots. When I say brutal and unflinching, I mean it, although this film isn’t as hard to watch as the D-Day landing in Saving Private Ryan. Still, the violence, despair, horror, cynicism, selfishness, betrayal, and poverty are hard to take. The miracle of this darkness is that Meirelles often makes it so alluring, not in that sort of glossy Hollywood way, but in a way that could make you feel that this is real and not some movie fantasy. The thing that most impressed me is how Meirelles is so able to create a sense of impending, sudden, and brutal violence in even the most benign scenes and settings. That goes a long way into creating verisimilitude – in making the film’s setting seem so real, and the drama so visceral and potent.

Based upon a true story, this film is so unlike anything else. Hell, it’s a film where even the “heroes” are sociopath, or at least seem so. For lovers of cinema, this is a film not to be missed. Beyond opinions about the subject matter, director Meirelles’ effort is one of the top directorial feats of the last few years, in particular when one accounts for the fact that he used so many amateur actors and was still able to stay true to the drama.