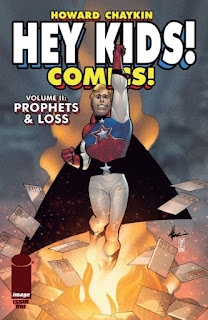 Hey Kids! Comics! Vol. 2: Prophets and & Loss is a new six-issue comic book miniseries from writer-artist, Howard Chaykin.  Published by Image Comics, it is a sequel to Chaykin's 2018 five-issue miniseries, Hey Kids! Comics!, which was described as depicting “nearly a century of turbulence and and drama in the American comic book industry” and also telling “the stories of the men and women that created it (with names changed, of course).”  Chaykin returns to his history of comics, and the creative team on this new series includes colorist Gustavo Yen and letterer Ken Bruzenak, a longtime Chaykin collaborator.

Hey Kids! Comics! Vol. 2: Prophets and & Loss #1 opens in 1970.  Here, Tommy has a fateful encounter with the comic book collection of his pal Ronnie's older brother, Ira, who is currently stationed in Vietnam (along with his father).  The story moves back to 1951, an important year in American comic books.  Comic book sales have dipped because the enlisted men market of World War II has faded, and the children of these formerly enlisted men are more interested in television than in comic books.

Meanwhile, in the offices of Graham Woods Publications (GW Publications), owner Paul Gertz is about to risk everything on a new line of comics books, if he can keep his two editors, Arnold Grossberg and Dick Altman, from each other's throat.  However, copycats and a self-serving trio could take GW and comics down for the count.

Like the first issue of original, Prophets and & Loss #1 offers a story that involves several characters, multiple employers, and lots of job changes.  In the first series, the shifts in time are jarring, as Chaykin introduces characters, plots, and settings without really focusing in on developing characters.  Thus, the first issue of the original series seems to be more about introductions than it is about examining the nitty gritty details of character, storytelling, and drama.

The shifts in Prophets and & Loss #1 are not about time, but do take the readers to different comic book publishing offices and studios.  These shifts are not as jarring as the ones in the original series, especially if you, dear readers, are somewhat familiar with American comic book history.  The places in Hey Kids! Comics! Vol. 2: Prophets and & Loss #1 are obvious stand-ins for EC Comics and National Periodicals (DC Comics).  This time, Chaykin is all about examining the nitty gritty details of character, storytelling, and drama

Several EC Comics creators, from Harvey Kurtzman and Al Feldstein to Wally Wood and William Gaines, make appearances under the guise of new characters.  Even Joe Simon and Jack Kirby make a cameo.  And my beloved trio of Ray Clarke, Benita Heindel, and Ted Whitman from the first series are also in Hey Kids! Comics! Vol. 2: Prophets and & Loss #1.

I heartily recommend that readers get the trade paperback collection of the first issue, and then, enjoy Hey Kids! Comics! Vol. 2: Prophets and & Loss.  I already am, and I can't wait for more.  The Hey Kids! Comics! series is among Howard Chaykin's best work, and, though I revere American Flagg!, this sly and shameless history of American comic books might be his best work.

I READS YOU RECOMMENDS:  Fans of Howard Chaykin will want to read Hey Kids! Comics! Vol. 2: Prophets and & Loss.