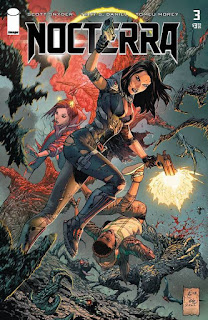 Nocterra is a recently launched comic book series from writer Scott Snyder and artist Tony S. Daniels.  Published by Image Comics, Nocterra is set on an Earth that has been experiencing an everlasting night, the “Big PM,” since the sky went dark and the world was plunged into an everlasting night over a decade.  Colorist Tomeu Morey and letterer Andworld Design complete the series' creative team.

Nocterra introduces Valentina “Val” Riggs – call sign “Sundog.”  She was in the fifth grade the day the “Big PM” occurred.  Any living organism left unlit in the dark for more than 10 hours starts undergoing a biological transformation and changes into a monstrous version of itself, becoming something called a “Shade.”  This is happening to her brother, Emory “Em” Riggs.

Thirteen years later (“13 PM”), Val drives a big rig hauler, a heavily-illuminated 18-wheeler known as the “Sundog Convoy.”  A skilled “ferryman” Val transports people and goods along deadly unlit roads between the few remaining human outposts, and now she has her most dangerous haul – a mysterious man and his granddaughter.

Nocterra #3 opens in Val's memories, as she recalls the time when people changed … when her parents became something else.  In the present, the notorious “Blacktop Bill” and his band of highwaymen (of a sort) are hounding the Sundog Convoy.  He wanted Val to surrender her passengers, Dr. Augustus McCray and his granddaughter, Bailey.  Now, he is out for all their blood, and to escape him, someone inside the big rig will have to make a sacrifice.

Meanwhile, black gums, gnarled bones, and haunting yellow eyes are the signs of someone transforming into a human shade.  Someone is showing at least one sign.

THE LOWDOWN:  As I said in my review of Nocterra #2, I enjoy Scott Snyder's creator-owned series more than I enjoy his recent work for DC Comics.  I also wrote that I am usually happy to read a comic book drawn by Tony S. Daniels, going back to his early days writing and drawing creator-owned titles at Image, such as The Tenth.

Well, I am having a blast reading Nocterra.  It reads like an old-fashioned pulp serial with its haunting settings, crazy monsters, bad-ass villains, questionable supporting characters, and one against-all-odds female hero.  In Nocterra #3, Val proves that she can drive the fury road as furiously as Furiosa.

Nocterra #3, like the previous issue, makes me confident that this series is one worth following.  If you are budgeting, dear readers, drop something else to make sure you enter the world of Nocterra every chance you get.

[This comic book includes a seven-page preview of the original graphic novel, “Kane & Able,” by Shaky Kane and Krent Able.]

Posted by Leroy Douresseaux at 5:46 AM