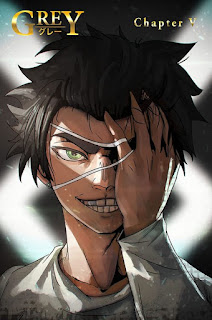 Grey is an independent comic book series from writer Kris Hornett and artist Ardee Arollado.  Published by The Grey Room, Grey is a hybrid, a combination of an American comic book format and Japanese manga.  Grey is similar to what was once called “OEL manga” or “original English language” manga.  These were American graphic novels in which the storytelling borrowed or mimicked the aesthetics and sensibilities of Japanese manga (comics).

Grey is set in the realm of Ketiyama (apparently an archipelago) and takes place some time after an event known as “the Sonoma Incident.”  This outbreak of the lethal “Moon Virus” on Nacirema, one of Ketiyama's islands, led to chaos, destruction, and division.  As a sign of good faith and as a last attempt to restore order, the ruling Board of Officials allowed the people to elect a team of highly trained tactical agents, known as “the Bureau,” to serve and protect them.  Within the Bureau is an elite unit known as “Nimbus.”  The members of this team of five agents are sworn to maintain moral balance and to enforce the law.  These agents are also able to manipulate their “prana” (“life energy”).

Grey Chapter 5 opens in the home of Asuna and Yuta Yagyu – recently murdered.  It is, however, an unusual death, as they have been posed in a process involving prana.  Now, they are “living portraits,” and it is up to Saya Yagyu – the Shriker of Malta – to discover who killed members of her family.  Meanwhile, the killer has absconded with her niece, Asuka, Asuna and Yuta's daughter.

The agents of Nimbus have joined her in the investigation, and Samara has seen “living portraits” in her past.  In fact, Samara knows who the killer is, and she and Shuyin prepare to lead the mission to bring in the killer.  Not everyone is happy with that plan, though.

THE LOWDOWN:  The Grey Room is about to release the first trade paperback collection of Grey, entitled Grey: Volume 1.  This TPB will reprint Grey Chapters 1 to 5, as well as, Chapter 3.5: Astrid and Chapter 4.5: The Right Thing, both “special release chapters.”  I think this collection will be the best way to read the series, as it will reinforce to readers how conceptually well-developed Grey is.

As I have previously written, when readers start from the beginning, they discover that the world in which Grey is set has a complex history.  Readers get to watch the authors build a world in front of them and also to experience some other elements of the series, such as its engaging mysteries and sense of discovery.

The one thing I do want to emphasize, which Grey Chapter 5 also emphasizes, is the strength of the characters in this series.  First, each character is independent in the sense that he or she has his or her own motivations, desires, and goals.  Hornett presents characters that are not beholding to other characters for their worth.  Certainly, one character can affect another via the action, but it is good that supporting characters and cameo players don't feel like mere window dressing in the dramas of Grey's most important characters.

The best example of that takes place in the second half of Chapter 5, which I want to be careful not to spoil.  Hornett has the Nimbus characters and investigators confront one another about various issues regarding the murder investigations.  Hornett does not depict any characters as “backing down,” which makes them all appear important.  Readers are welcomed to pick a favorite character or even assume a character is the lead, but like Japanese manga, this American manga respects the idea of an ensemble cast with many quality characters.

Ardee Arollado's art, which gets more powerful with each chapter, conveys this in the way he composes the characters.  Sometimes, his art and storytelling seem like impartial observers, presenting the drama in large-size panels, capturing a stage in which each character has the power to affect the drama.

So after praising the characters, I have to heartily recommend Grey to you, dear readers.  And with this new trade paperback, you can still get in on Grey's intriguing ground floor.

I READS YOU RECOMMENDS:  Fans of manga-inspired comic books and of good science fiction comic books will want to read Grey.

Posted by Leroy Douresseaux at 1:19 PM