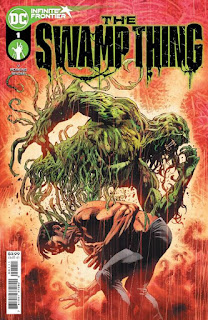 Swamp Thing is a horror comic book character from DC Comics, of which there have been different versions.  Swamp Thing is a plant elemental and a sentient, walking mass of plant matter.  Created by writer Len Wein and artist Bernie Wrightson, Swamp Thing first appeared in House of Secrets #92 (cover dated July 1971).

The best known version of Swamp Thing is Alec Holland (Swamp Thing #1, October/November 1972), a scientist who becomes Swamp Thing due to a complex process involving his death, a “bio-restorative formula,” and a bomb.  British comic book writer Alan Moore came to fame in the United States when he began writing the early 1980s Swamp Thing comic book, Saga of the Swamp Thing, with issue #20 (January 1984).  Moore re-invented the character with issue #21 (cover dated: February 1984) and since then everyone who has written the Swamp Thing has worked in Moore's shadow...

Swamp Thing reemerges in a new ten-issue comic book miniseries, The Swamp Thing.  It is written by Ram V; drawn by Mike Perkins; colored by Mike Spicer; and Aditya Bidikar.  The Swamp Thing introduces the next “Guardian of the Green” (what DC is calling Swamp Thing … now) as he faces a supernatural legend and a new adversary.

The Swamp Thing #1 opens in the desert (near California/Arizona border?) at a crime scene.  There, a decaying body shows sings of being eaten by something that might be human.  This grisly scene might also be the result of a grisly murder connected to a local desert legend, a supernatural being called the “Pale Wanderer.”

Elsewhere, Levi Kamei is dealing with being the Guardian of the Green, and he is unable to control his transformation into the monstrous Swamp Thing.  Returning to the United States from his home country of India, where Levi found that his problems could take root even there.  Can he truly comprehend the horrifying reality of what he is now?

THE LOWDOWN:  As far as I'm concerned, there is no Swamp Thing comic book writer that can match what Alan Moore accomplished with the character … except Swamp Thing's co-creator, the late writer and editor, Len Wein.  However, other writers have done some good work with Swamp Thing, such as the writer who succeeded Moore, the eclectic scribe, Rick Veitch.

After reading The Swamp Thing #1, I believe that Ram V could be the next great Swamp Thing scribe.  If he mixes dark magic with even darker violence, as he seems to be doing with this first issue, The Swamp Thing may be the launching point for a new era of the character that will actually last longer than a few years.  I am intrigued by the potential for international settings and for magic that originates from different traditions.

Readers will find The Swamp Thing #1 a readily accessible first issue for new readers or for readers who have not bothered with Swamp Thing for a long time (like me).  Thankfully, Ram V does not live up to his name.  He does not force or ram the reader with his new ideas.  He is a gentle and considerate, but imaginative storyteller.

I am glad to see that Mike Perkins is drawing The Swamp Thing.  He is a modern master of dark fantasy and horror comic books, and in this first issue, his compositions are powerful, resulting in graphical storytelling that grabs the reader with its action and drama.  Mike Spicer's haunting and rich color palette captures the shifting realities and grisly violence of this first issue.

The lettering by Aditya Bidikar steadies the rhythm of a story that has the potential to get out of hand with its sudden explosions of violence.  Instead, the violence keeps its place in the story.  This is all the more reason to at least try The Swamp Thing #1, if you can still find a copy in your local comic book shop.  I suggest that you try to dig one up.

Posted by Leroy Douresseaux at 4:27 AM