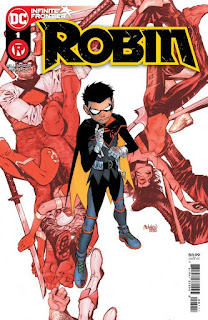 One of the most famous sidekicks in pop culture, Robin is a DC Comics superhero character.  The original Robin's civilian identity was Dick Grayson, the ward of millionaire Bruce Wayne and therefore the sidekick of Wayne's superhero alter ego, Batman.  Robin/Dick Grayson was originally created by Bob Kane, Bill Finger, and Jerry Robinson and first appeared in Detective Comics #38 (cover date:  April 1940).  Eventually, Dick Grayson became a new superhero, Nightwing, and over the last 30 years, there have been other Robins.

Damian Wayne is the son of Bruce Wayne and Talia al Ghul, and thus, is also the grandson of Batman villain, Ra's al Ghul, Talia's father.  An unnamed male infant credited as Batman and Talia's child first appeared in the original graphic novel, Batman: Son of the Demon (1987).  Other writers would later compose speculative stories about the child's life.  In Batman #655 (cover dated: September 2006), writer Grant Morrison reinterpreted that child as Damian Wayne, the centerpiece of the story arc, “Batman and Son,” in which he became the fifth character to assume the role of Robin.

As part of DC Comics' “Infinite Frontier” initiative, Damian Wayne is the star of a new ongoing comic book series, simply entitled Robin.  It is written by Joshua Williamson, drawn and colored by Gleb Melnikov; and lettered by Troy Peteri.  In this new series, Damian wants to prove that he is the greatest fighter in the world (DC Universe).

Robin #1 opens with the search for Damian Wayne.  Batman, Nightwing, Tim Drake/Robin, Orphan, Stephanie Brown, and Oracle can't find him.  It seems Damian is as “off the grid” as a person can be.  Elsewhere, Damian is taking on Sir Edmund Dorrance a.k.a. “The King Snake,” who, like Damian, is searching for the “League of Lazarus.”  It is this league that holds the “League of Lazarus Tournament.”  Held every 100 years, this secretive tournament gathers the best fighters in the world.

That is where Damian thinks he can prove that he is the best fighter in the world, but first, he will have to find the secret island where it is held.  That means he will need to win a special marker, and The King Snake wants that marker, too.

THE LOWDOWN:  It seems that if Damian Wayne a.k.a. “Robin” is going to have an ongoing comic book series, it should not simply be another entry in the “Batman family” of titles.  Damian needs a goal or a mission.  His quest to be the best by taking on the world's most deadly combatants sounds like a good idea.  What is even better is that Damian's hubris and his lack of knowledge of those that he will face present obstacles and conflicts that are comic book narrative gold.  So, in this first issue, writer Joshua Williamson offers a good set-up slash introductory chapter that will keep readers interested – at least for a few issues.

The art by Gleb Melnikov is stylistically appropriate for this series, but Melnikov's compositions are wild, untamed, and untrained.  He isn't anywhere near being called a draftsman, and his illustrative techniques … well, he is weak on the techniques of graphical storytelling.  I don't mean to say that he cannot tell a story using the medium of the comic book; the storytelling is clear, while the drawing is a bit chaotic.  On the other hand, his Robin #1 cover art is beautiful, and I have seen some of Melnikov's cover art and single-page illustrations, and they are also visually and/or graphically striking.

Melnikov's influences show, and to be honest, every page and some times every panel shows a new influence.  I see Art Adams and early Joe Madureira.  There is some early Tony S. Daniel – think the Tony Daniels of The Tenth (Image Comics).  There is some Jim Lee and a little Rob Liefeld.  I think Gleb Melnikov has the potential to become a superstar artist, and the process of doing a monthly comic book title may bring that out.  Right now, as I've already stated, his drawing is raw, but, at the same time, I must admit that he is already a sharp colorist.

Troy Peteri's lettering also provides a nice balance to the tone of the story.  He creates a steady rhythm that heightens the intensity of the violent, Mortal Kombat-like battles.  So, this new Robin comic book is definitely worth another look or two.

I READS YOU RECOMMENDS:  Fans of Damian Wayne will want to read Robin.