Review: "PAUL MOONEY: Know Your History - Jesus is Black and So is Cleopatra" 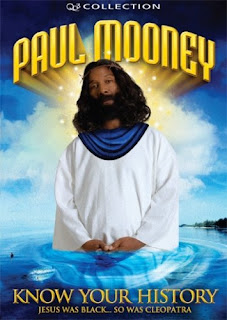 Mooney was a comedian who seemingly loved controversy.  After all, he was also the creator of the character, “Homey the Clown,” for the early 1990’s TV sketch comedy series, “In Living Color.”  Mooney returned to the small screen with the DVD release of his stand-up comedy film, Paul Mooney: Know Your History – Jesus is Black and So is Cleopatra.  Mooney took center stage at Hollywood’s Laugh Factory for a stand-up comedy performance, which was recorded and became this film.

In Paul Mooney: Know Your History – Jesus is Black and So is Cleopatra, Mooney delivered his incendiary brand of comedy.  From the opening moments, he charged into his fiery subjects, which usually included racism, white people, racial tension, and, in this performance, the finer points of Black History.  He talked about divas, living in White America, President George W. Bush, Scientology, and various social and political topics.

Know Your History is edgier, darker, and perhaps a bit more mean-spirited than a previous Mooney DVD release, Paul Mooney: Analyzing White America (2004).  I am sure Analyzing White America was once known as Paul Mooney Live, and it was much funnier than Know Your History...  Still, in this second film, Mooney discussed racism and racial issues in America like no one else, and did so with the passion and honesty that most mainstream American political and social commentators could never match.  For all his bluntness, Know Your History... still had me doubled over with laughter.  Know Your History... is funny, but white people, the politically correct, and the sensitive are warned.  Professor Mooney’s history lesson might burn your mind to a crisp.

The stand-up is interspersed with some documentary footage and also testimonials from a number of celebrities including David Alan Grier, Lori Petty, and Sandra Bernhard, whom Mooney once mentored.  In light of his recent passing (as of this writing), I recommend that you seek out Paul Mooney: Know Your History – Jesus is Black and So is Cleopatra, dear readers.  If you don't know him, Mooney, as sharp social critic, is worth discovering, and if you only know his TV work, here a chance to discover Mooney at his best.